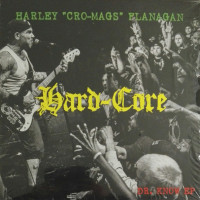 2016’s Cro-Mags finally found Harley Flanagan rising to the hallowed heights of Age of Quarrel. At long last, we had Harley doing what Harley does best- hard riffs, street knowledge, direct yet poetic lyrics, and just a tinge of classic punk rock swing. So, it’s no surprise he quickly followed that up with the Hard-Core EP, which bears the subtitle Dr. Know as it benefits the Bad Brains guitarist to help him with his recent medical bills.

As hard and as fast as Cro-Mags was, Hard-Core doubles down on the bluster. The six tracks all blast by in what seems like a few minutes. There’s barely any solos, with Flanagan utilizing his trademark bass charge as the lead in the procession. Even his voice is more volatile than before. Now he sings with a wet bark that could almost draw comparison to David Johansen and his famously unpredictable timber.

Despite that this release is a sprint, Flanagan slyly drops in his scars-and-all wisdom. “Sometimes you’re the hammer (sometimes you’re the nail)” might be the most Harley-ish title ever. “With Friends Like You (Who Needs Enemies)” might be a phrase that’s been overused, but Flanagan is able to make it seem like its spoken from the soul than any sense of posturing. (The outro, featuring a UK82 style chorus helps, too, for sure).

Cro-Mags seemed like a calculated statement- Harley staking his claim to what’s probably the most contentious throne in punk. Meanwhile, Hard-Core feels more like an impulse- something suddenly sprung into the bassist's head and heart that he needed to spit out into the world. What’s striking is that both forms, the planned and the instinctual, find Harley at his best. The music of the Cro-Mags always made it a point to focus on body or mind, but when either of those aspects are used in isolation, it seems we still get vibrant material. That’s probably why, when so much hardcore sounds like mindless “tough guy” drivel, Flanagn’s release come across as thoughtful and well rounded… even if he sounds like he’s about to wrap his hands around your neck on the EP.

Nothing: Dance On The Blacktop