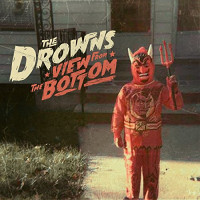 Live! From The Rock Room

We all have our most anticipated records of the year, but sometimes a band releases an album that is a total surprise to the overall scene. No one saw it coming or knew the band was working on an album. It just comes out of nowhere. This is the case for The Drowns’ debut full-length View From The Bottom. Made up of members of Success, The Shell Corporation, and Coyote Bred, each member of the trio brings different aspects from their respective projects to this record, making it a very unique, yet approachable melodic punk album filled with a wide array of lyrical topics ranging from addiction to self-reflection to time quickly going by.

For the most part it is Aaron Rev who takes on the lead vocals through out View From The Bottom. The first track, “Eternal Debate,” which takes aim at inept keyboard warriors (“We’re cowards at best/We’re heroes laid to rest/Sit behind our keyboard and pray for change/We’re posting articles that won’t change the world/That won’t do a god damn thing, I know”), sets the tone for the record quite well. Right a way, it blasts out with hard-hitting guitar chords and Rev’s gravely voice taking the reigns, which is backed up by Andy Wylie’s slick and swift bass fills. Where the band truly shines though is on the title track. Instead talking about the world around them “View From the Bottom” looks in inward in a bit of self-deprecating way. Despite this, the song is actually the most anthemic of the ten tracks on the album. This track is also where his and Andy Wylie’s backing vocals mesh together fantastically. The multiple verses that start the song pay off extremely well once they hit the gigantic choruses, which are complemented by some quick guitar bends.

While Aaron Rev does sing lead for the majority of the album, there are a few where Andy Wylie takes over such as “I.C.U.” and “Time Slips.” “I.C.U.” is also one of the stand-out tracks of View From The Bottom. It has a bit of a darker and gloomier tone compared to other the rest of the record, but it does keep in line with The Drowns’ style. This time you hear Andy’s clearer singing backed up by Aaron’s raspy, yet sharp backing vocals and sparkling guitar chords and fills during what is also a very anthemic chorus. In those respects, “I.C.U.” is kind of the sonic opposite of “View From the Bottom.” It is a very cool way to change things up towards the end of the record.

Fans of veteran melodic punk bands like Hot Water Music and The Bouncing Souls will enjoy The Drowns’ View From The Bottom and fans of the members’ other bands will definitely enjoy it as well. It is a fun and dynamic album that is clearly one of the notable surprise records of 2018.

Nothing: Dance On The Blacktop

Five Finger Death Punch: And Justice For None