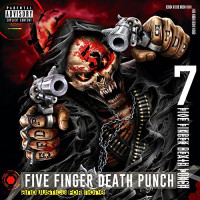 Metal can be a very polarizing genre of music. There are many different styles and sub-genres that live within the metal genre, many of which, have very little cross over with each other besides sharing the greater genre as a whole. I love metal, always have – it served as a stepping stone that enlightened me to the greater punk rock sub culture. With that introduction aside, one arena of metal that has gone by the wayside for me is mainstream metal, and for the most part, for good reason. The band Five Finger Death Punch was brought up to me in a discussion regarding mainstream metal, as well as Disturbed, and it occurred to me that for all of the polarized opinions of Five Finger Death Punch, I had not heard a single lick of their music – outside of the eyesore t-shirts I’ve seen walk out of your local Hot Topic. I actually know next to nothing about Five Finger Death Punch. The following was my first experience with, the above-mentioned band, enjoy.

Right out of the gates with the bands most recent LP, appropriately (and oh so cleverly) titled And Justice For None, the music is down-tuned, well produced and straight to the point. The vibe of the entire record is an obvious dig (if the artwork isn’t hint enough) at Donald Trump and the current quasi-political climate of the world presently. The music is written to be memorable for the masses, nothing too difficult to wrap your head around is provided here. The musical abilities of the band members themselves, are impressive, the drumming and guitar work throughout the album is impressive. That however, is where the majority of my praise ends.

Musically the band sounds like an over simplified mash up of mid-90’s Pantera, Black album era Metallica, and Nickelback. The majority of the songs feature fast and heavy verses with guttural screaming; or a sort of baritone, spoken word, that transitions into arena rock choruses featuring the world famous Kroger-style croon. The band even peppers a couple of power ballads into the mix for good measure. The most interesting part of And Justice For None comes on the special edition version of the release in the form of a cover of The Offspring’s “Gone Away”. It actually is not a complete disaster, the lyrical quality of the cover is a high point within the album itself and the cover feels natural. It is not my style of choice, but the band pulled it off nonetheless.

To sum things up here, while for the most part Five Finger Death Punch’s most recent musical output, And Justice For None is easy to write off as a total disaster. When I dig a little deeper, it is obvious to me why some people love this band. The music is easy to digest, and the band strikes a good combo between abrasive and melodic. That being said, nothing presented above is unique. All of the best aspects of the band could be found elsewhere within the genre that isn’t quite as tacky and overt as Five Finger Death Punch. I could dump on the band further, but it seems that they know their audience and they play into it. What I can’t tell is if the band is in on the joke or not, I hope that they are, after all, how many times can you use brass knuckles and skulls in a design…

The Drowns: View From The Bottom