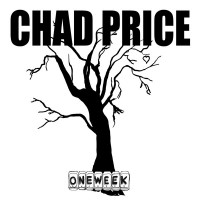 One half of Drag The River, sometimes lead singer for ALL, lead vox for A Vulture Awake and solo singer/songwriter, Chad Price, has a fairly stacked resume. Hot off the heals of the fantastic punk rock debut, “The Appropriate Level Of Outrage” by the aforementioned A Vulture Awake, we are treated to Price’s second solo album.

Released through Joey Cape’s One Week Records, this one was done a little different from the rest with of that labels releases with Chris Fogel producing this go around instead of the Caper himself. Fogel brings a lush, warm, full feel to Price’s songs, which are notably a step up from his first solo release, 2009’s “Smile Sweet Face”. Where that record is a mostly stripped down, “singer with a guitar” style affair, his second release gives us the full band treatment on most songs but not overpoweringly so. Price is clearly front and center on every single song here.

Clearly this release is more Drag The River than ALL as far as style of songwriting goes. Country and folk vibes permeate each track. The warm, inviting slide guitar on perhaps the prettiest song on this record, “Ice”, along with it’s catchy melodies and personal lyrics make it no doubt that Price has grown in confidence as a solo artist since “Smile Sweet Face”. Price let’s us into his personal bubble and headspace all throughout this thing. “As Free” is as Simon & Garfunkel-esque as Price has ever sounded. Coming across as a simple little tune at first, this song shows a very folky side of Price’s songwriting. The chaotic end to “God” adds a distinct heaviness and passion to the otherwise musically simple yet lyrically heavy track, which ends the song in a satisfying fashion. The songs vary in sound from track to track which helps the record as a whole grow stale as the songs bleed from one to another.

This record doesn’t break any new ground musically but Price does what he does best here. Lyrically and musically speaking, it’s a melancholy batch of personal songs from a man that has shown himself to be a leader in this over populated landscape of “singer/songwriters”. He’s proven he can play well with others or lead the charge with just his acoustic guitar just fine.