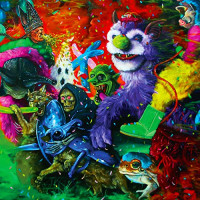 When Australian art-punk band The Drones took a hiatus in late 2016, front man Gareth Libbiard and Fiona Kitschin joined ranks with Lauren Hammel (High Tension), and Erica Dunn (Harmony and Palm Springs) to form what may be one of the better named bands of the decade, Tropical Fuck Storm. And on their debut Laughing Death in Meatspace, they create a sound that resemble Jon Spencer Blues Explosion jamming with mid-nineties Fugazi.

Opening with “You Let Tyres Down,” the band explodes with distortion laden blues guitar, that brings to mind the guitar melodies of Built to Spill or Teenage Fanclub, if the distortion were cranked to eleven and channeled through Jon Spencer styled blues. In short, this is what would pass for indie rock in the early nineties. In addition to the great guitar work, Gareth Libbiard’s vocals bring to mind everyone from late 70’s Joe Strummer to New Model Army’s Justin Sullivan, to Jon Langford of Mekons/Waco Brothers fame, with just a touch of Mark E. Smith thrown in for good measure.

The Mark E. Smith influence is most apparent, however, in the lyrics as Libbiard’s ability to turn a phrase shines through on tracks like “Antimatter Animals” when he barks, “Your politics are nothing but a fond fuck you.” And then later on “Soft Power” when he warns, “Here comes the oompa loompa with the nukes.” The delivery of these lyrics shifts between a snarled singing and a shouted bark, and is never without just a touch of the swagger you’d find in an early 70’s Rolling Stones song.

The band is also able to, quite successfully, mix subtle sounds with more driving guitars especially on “Two Afternoons” which makes a not so flattering examination of organized religion. The band shows off their ability to really slow things down and craft subtle melodies on tracks like “Selfish Town” which also works quite well as a pallet cleanser after several tracks of louder guitar rock.

This whole album really takes no prisoners, and brings to mind everything that was good in the underground music scene from the eighties into the early/mid-nineties. Lyrically, the band takes no prisoners and holds nothing back shouting down religion, political leaders the world over, and anyone else that gets in their way. They also are able to do what so many modern bands fail to do, blend their influences well. While many of today’s bands who talk about the diversity of their influences isn’t able to bring them all to the forefront in a single song, often displaying them on separate tracks. Tropical Fuck Storm does this flawlessly and without letting those influences smother their own voice in the process.

This album dropped in March, I wasn’t lucky enough to hear it until mid-August. If you haven’t heard them yet, do yourself a favor and take forty minutes to check the album out. I’ve listened to it at least fifteen times in the past week, and don’t see it falling out of regular rotation anytime soon.