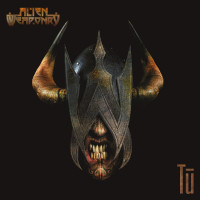 So here’s something a little different. Teenage, Maori metal. Not something that I’ve happened across before and indeed I can’t pretend that I’ve really been overly aware of any Maori music up to now (beyond the Haka). So we’ve got a type of music that’s typically aggressive, played by people at an age where rage and angst often reign - and the Maori have something of a reputation for being tribal - so...does it sound like those things suggest?

Yup. It really does. But before we get into that, for clarity, Alien Weaponry are a 3-piece, made up of 2 x 15 yr olds(!) and 1 x 17 yr old – 2 of whom are brothers. That’s pretty crazy in of itself (they could only play Bloodstock in England recently as they were on school holidays), but all the more so when you learn that the band was formed by brothers guitarist/vocalist Lewis De Jong and his younger brother/drummer Henry de Jong when they were 8 and 10 respectively, in 2010. When I first heard those building blocks of this record, I had limited expectations - largely because it’s not that often you hear a record that has a great deal to offer when the average age of the people involved is less than 16, let’s be honest. Well shame on me for daring to presume.

What’s immediately obvious about the record is how proud the guys are of their Maori lineage and culture. Much of the record is written and sung in their native tongue, which works really well - because frankly, it’s a really unorthodox, powerful language. Tribal and intimidating at times, it’s absolutely perfect for evoking their anger and frustration at the treatment of their people by the New Zealand government and the perception that people have of the Maori since colonisation. I’d also say there are no major issues with vocal delivery as you might fear from people of this age. Lewis sounds like the offspring of Daniel Johns and a young Robb Flynn at times, and the tribal chanting passages don’t feel for a split-second like they’re the work of kids; but proud, chest-thumping men.

Musically speaking, in spite of their website describing them as a thrash band, we’re much more in straight metal territory – we’re talking Les Paul through a Marshall stack stuff, but with groove dominating chunks of the record and the towering riffs being at the centre of the songs in the main. All these things considered, it’s hardly surprising that Roots-era Sepultura comes immediately to mind – especially in the tribal-inspired moments. But that’s hardly a criticism, is it? Both the drumming and bass-playing (the latter performed by Ethan Trembath) are sufficiently direct and thick-textured that they do exactly what they’re meant to – without often straying from the blueprint, it has to be said.

And that’s probably where my only semi-criticism lies. After the first track (a combination of ambient noises and Maori spoken word in the background), you get into the meat and potatoes of the record in track 2 “Ru Ana Te Whenua” and although there’s nothing wrong with having a song to kick off that represents the album as a whole, you get almost the whole album encapsulated in that first song – and with the record clocking in at 55 minutes long, you do start to crave a bit more invention in the final 15 minutes of a full listen. But as these are 15 and 17-year olds, it feels unreasonable to say that – however, I’m also conscious that I don’t want to patronise. There’s no denying these are talented guys we’re hearing here. So although there isn’t a huge amount of variation on the record, there are clear signs that it’s not beyond them. The bassline from “Te Ara” sounds like something Chris Wolstenholme from Muse would come up with, and the deployment of Maori instruments from time to time does at least mean that the over-arching feel of the album doesn’t grow stale and continues to feel legitimate throughout.

So ignoring the fact that this has been made by people half my age, I have to say that it’s a really solid debut. Powerful and culturally interesting, but with monolithic riffs and a couple of real singalong ragers (first 2 singles “Urutaa” and “Raupatu” included) that will no doubt push them onto larger and larger stages in the coming years. I am really excited to see what comes next from these guys. After school, that is.