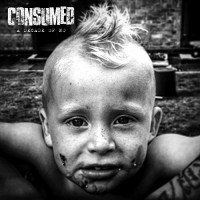 I’m not going to lie. I’ve been a huge fan of Consumed for a long time. I was first introduced to the band when Fat released their first EP back in the late-90’s (and was curious before that when Fat announced they had signed the band via the first Fat website in '97). When Consumed went their separate ways in 2003, I was bummed but, thankfully, they reformed in 2015 and now have released their first new material since 2002’s Pistols at Dawn.

That being said, I’m gonna tell you right away that this album is much more Pistols than Pappa’s or Hit For Six. As the band progressed, so their sound evolved. What started off as a kind of thrash meets skatepunk on Pappa’s evolved to a skatepunk meets Fat sound on Hit, and then into a metal meets skatepunk on Pistols. Although still fast and furious, there is a level of precision and composition on the new album that speaks more to the headbanging side of me than the early Fat releases

Don’t take this as a criticism, though. More so than most other bands, A Decade of No doesn’t sound as if there was any interim, let alone sixteen years, between albums. Consumed is as tight as before, if not more, and the time apart seems to have allowed the members to hone and improve their sound

The album fires off with the (for Consumed) mid-tempo track “Wake Up Warning,” which features their trademark playfulness mixed with Steve Ford’s straight-up working class vocals. “Devils Chords” is a lightning fast track that is angry, energetic; and stays strong throughout.

“Obscene Like Beverly Dean” is likely the weakest track on the album. Consumed has a thing for singing songs about specific subjects, and they tend to be great. This one just seems a bit forced. As a story, it seems too meandering, and I'm not sure what I'm supposed to thing (or believe) about the titular council estate beauty queen when all is said and done.

The highlight song on the EP is “What Would Cliff Burton Do?” Excellent composition and catchy beat, the songs does the most with all aspects of the band from the instruments to Ford’s vocals. I can see why this was the first track on the album to be released.

“Cut Me Down”rounds out the album as a mid-tempo track with some faster parts that builds up and then tears itself down. Heartfelt and hard.

I’ve met a lot of people who prefer early Consumed, and they are likely to not appreciate the more refined style on Decade. I’ve also met a lot who like Consumed as a whole across their discography, or those who prefer Pistols. I’d say that they will be most pleased by this album- an exciting return for one of the most underrated bands from the punk heyday of the late 90s.