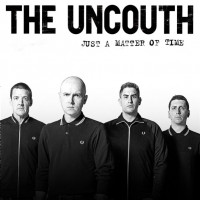 Just a Matter of Time is the ripping new single from Kansas City street punk stalwarts The Uncouth. It’s not quite as fresh as it should have been, because record pressing nightmares pushed its release date back by months. (We actually premiered the song and accompanying video here at Punknews earlier this year.) I loved their 12 inch EP Jonesy’s War from a couple years back, and have been looking forward to getting my hands on this. I’m happy to report that the KCMO quartet has made a record that’s worth the wait.

The Uncouth are a ragged combination of classic punk and Oi combined with good old fashioned hardcore. I think a Cockney Rejects/Discharge mashup would be a good starting reference point. “Just a Matter of Time” has an undeniably threatening intensity. It sounds like a bomb that’s ready to explode. The music is the perfect metaphor for the unrest rising among the working class. It might remind you of the unhinged nature of the early Keith Morris era Black Flag songs like “Nervous Breakdown” or “Fix Me”. The sense of desperation really sells it. “Just a Matter of Time” would be a great punk song in any age.

The B-side of this big hole 45 is an old Woody Guthrie tune called “All You Fascists”. It dials the musical intensity back just a little, but the words remain deathly serious. As a counterpoint, some added piano gives the song a bouncy, almost optimistic feel. It provides a nice balance to the simmering negativity of the more ballistic A-side. Just a Matter of Time is an excellent little record. If you’re a fan of street punk, it’s definitely worth hunting down. It also serves as a great reminder that there’s a ton of awesome punk stuff coming from the flyover states.