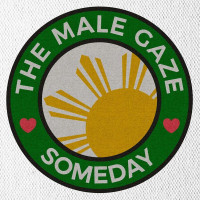 Born out of the Filipina feminist collective GRRRL GANG MANILA, and performing in girl scout uniforms adorned with feminist patches and pins, The Male Gaze is keeping the flame of Riot Grrrl alive with their debut single Someday.

The easy comparison to draw to this 2-guitar, no-bass four piece would be Sleater-Kinney. The dual guitar lines of Mariah Yonic and Ymi Castel meander around each other with a certain post-punk loucheness that conjures Tom Verlaine as much as it does Corin and Carrie. Drummer Ristalle Bautista, formerly of Duster, does the yeoman’s work of keeping the train on the tracks and moving forward at a driving pace.

Lead singer Mich Dulce, who name checks bands like Bratmobile, Le Tigre, and Bikini Kill as her entrés into feminism, has a clean, clear singing voice which she can modulate into a howl as needed. Dulce, who also founded the GRRRL GANG collective, writes songs about sex, gender norms, and President Duterte’s penchant for misogynistic humor. To write songs criticizing a leader who has openly fantasized about personally murdering people should more than establish the punk rock bona fides of The Male Gaze.

It’s the harmonies on Someday that really hint at the potential The Male Gaze have for a full length. They’re deeper and better than they need to be, full of counterpoint and interesting choices. That full length, when it comes, will hopefully realize the full potential that Someday is hinting at.

The Uncouth: Just a Matter of Time [7-inch]

IDLES: Joy as an Act of Resistance.