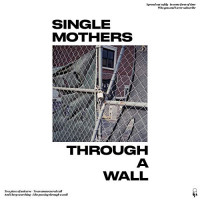 Ontario's Single Mothers rarely miss the mark for me. Since I heard "Winter Coats" over five years ago I knew I'd be holding them a very high standard, and it's really amazing to see how they've lived up to expectations every release. Through A Wall dropped as a surprise and what I love most about it is it's so bold in that it goes right back to the sound of old after last year's Our Pleasure seemed to take a more catchy, melodic and dare I say, poppy route.

Off the cuff, Single Mothers signal their intent with "Marathon" -- a buzzy post-hardcore snarlfest fit for fans of ATDI, Comadre and Life in Vacuum. Just when it seemed vocalist Drew Thomson chilled out and was seemingly taking a less angry stance on the mic, well, let's just say he does away with that peaceful notion. It's all about hardcore punk (well, mostly) -- as per tracks like "Catch and Release", "Engine" and "24/7". Think of Touche Amore's old musical backdrop and slightly dial it down a notch and that's what this sounds like.

The poppy vibe (which I loved when I heard "Leash" on the last LP) comes alive once more on "Stoic/Pointless" which has Drew singing more as opposed to his spoken-esque style.  Of course, that comes to the fore to wrap things up on "Evidence Locker" which feels like old-era Self Defense Family and more or less sums up how much tribute is paid to the bands which influenced Single Mothers' earliest musical style. Heck, I'm sure they'll go back to the catchier signature on the next album and pull it off well once more there. That's how brave and carefree they are, and it's just the way Drew rolls. Middle-fingers to university students, gentrification and booze -- and oh yeah, maybe... the Canadian way of life.

IDLES: Joy as an Act of Resistance.