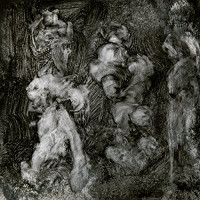 A pulsing heartbeat pushes a gelatinous elixir through the veins of With Animals’ opening track “Save Me” as Mark Lanegan’s mournful baritones pleads through a wall of static for redemption and salvation for himself and the other “midnight children.” The undulating introduction serves as a defining motif for what is to follow as Lanegan and collaborator Duke Garwood utilize minimalist synthetic percussion to backdrop a menagerie of woodwinds and sonorous guitar. The reversed percussion and warped sonics of “Feast to Famine” conjure an ominous tableau as Lanegan recounts a mysterious sojourner who “is good for the damage” and has been “from feast to famine / and all points in between.”

With Animals follows Bristish multi-instrumentalist Duke Garwood’s 2013 collaboration with Mark Lanegan on Black Pudding, which was released on Ipecac / Heavenly Records. More recently Garwood released Garden of Ashes last year on Heavenly, while Lanegan released last year’s Gargoyle (credited to Mark Lanegan Band which incidentally also contained contributions from Garwood). With Animals finds Lanegan continuing his fusion of organic instrumentation and synthetic programmed sounds, but on this outing, he and Garwood opt for a more subdued and slithering incarnation that stands in contrast to the pounding percussives of Lanegan’s Phantom Radio.

Garwood and Lanegan follow their muses into a soggy deciduous fantasia, transforming the Pacific Northwest into the River Styx. “My Shadow Life” teeters between skittering percussion and off kilter woodwind harmonies coated by a disorienting mixed double vocal from Lanegan. “Upon Doing Something Wrong” is a lovely, plaintive acoustic lament gently supplemented by warbling background melodies. The title track admonishes a parade of domestic assassins over a resonant guitar line and drum machine snap as Lanegan vows to abandon these disappointing romantic pursuits and heal with the company of animals. “Ghost Stories” casts Lanegan’s disembodied voice as a specter from another room that slips under the door and swirls around an endless ceiling. The duo stare into the abyss on “Spaceman,” featuring an inspired tremulous guitar from Garwood, and employ another hidden room vocal effect that serves to invite the listener into a hallway with doors to the unknown.

Throughout With Animals, Lanegan allows his inimitable voice to carry impressionistic lyrics that often return to a spartan refrain. Lanegan’s restraint allow the listener to fill in the canvas with their own reactionary perspectives while Garwood’s melodies and percussion imbue the compositions with a sense of foreboding. As our two underworld guides lead us through a dark forest of uncertainty, the music created invokes a sensation “lonelier than death.” However, despite the apprehension, the end result of the album will leave you longing to “continue this dream.”

Single Mothers: Through A Wall