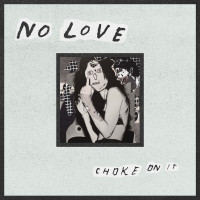 “You bit off more than you can chew / and you can fucking choke on it,” snarls Elizabeth Lynch during the opening burner off Choke On It, No Love’s debut record. No Love have been scene stalwarts in their hometown of Raleigh, North Carolina for over half a decade, yet Choke On It marks their first official full length. The riff on the title track immediately jars the listener to attention as the guitars needle up and down while a chaotic mix of bass and drums rages in the background. For the next 20 minutes, the band doesn’t let up for a fucking minute.

Choke On It is relentless in its pursuit of truth. Despite the frenetic energy from start to finish, No Love layer their brand of thrashy punk rock with discordant guitars leads and distorted bass riffage over double-time drums. There’s enough hyperactivity going on here to warrant unpacking during repeated listens. Whether offering fret-burning solos, like during “Mid Mouth,” or breakneck surf rock leads into crushing chord combinations, see “Bad Things,” No Love seem as if they could fly off the rails at any moment. They play with the energy of the Dead Kennedys, a deserved and apt comparison.

No Love are more than some homage act to the surf inspired hardcore of the past though. “Same Shit” sounds like if Ex Hex had been on a three day speed induced bender. The walking bass line cuts through the frantic bending of guitar strings despite its tempo. Fans of Night Birds and White Lungs will also find a lot to like here. “Dogs//Wolves” is an album highlight combining elements of both the aforementioned bands. Keeping up with the ethos of the album, most of the tracks clock in at two minutes or less. They also give a nod to their local scene putting their spin on ISS's "Back Taxes and Anaphylaxis."

No Love’s debut record Choke On It finds the band pissed and wanting to lay waste to anyone who dare crosses their path. The album deals with societal failures, those who underestimate your identity, double standards and life’s pressures. The devastating sounds and caustic sarcasm the lyrics are spit out with is in tune with 2018’s Zeitgeist. If you’re looking for a slab of angry punk rock to match the times, you won’t go wrong with No Love’s Choke On It.

Ship of Fools: A Perfect Place For Harmony

Tsunami Bomb: Lullaby for the End of the World [Digital Single]