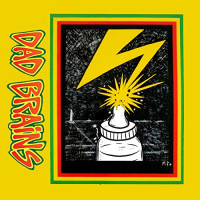 You can definitely file Dad Brains under the category of novelty act. Their album art is obviously a Bad Brains homage (or rip off, depending how you look at it), and all the songs are about being fathers to young children. They offset that goofiness with an unflinching sincerity, and also by bringing some serious punk and hardcore credibility to the table. Dad Brains are made up of former members of No Motiv, The Missing 23rd, Creep Division and The F-ing Wrath. While the songs are humorous, they’re also not afraid to kick a little ass.

Side A starts with “Intro”, which is really more like a chanted mantra set to music. “Baby Jail” describes being trapped at home because you’ve got young children. “Quiet Time” is about the wrath you face from your wife if you make too much noise and wake your kid up. The music is straight up aggressive punk. The vocals are somewhere between HR’s wail and a tired dad’s whine. Side B has the writer grappling with all his new found emotions on “I’m Emo”. “I’m Old” is the fairly self explanatory closing cut. The five tracks whizz by in less than ten minutes.

There was certainly a time when I could relate to this. My kids are in their teens now, and these songs serve to remind me how much I don’t miss having babies and toddlers around the house. Ultimately this works because the songs are as catchy as they are funny. DB’s chops are legitimate. In this case, being a novelty act is not a bad thing. Dad Brains should appeal to much wider audience than just the diaper changing crowd.

The Distillers: Man Vs. Magnet / Blood In Gutters [single]