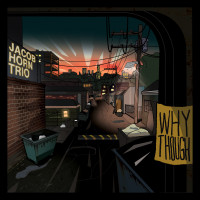 Don’t be fooled by this. The Jacob Horn Trio is not a ska-punk outfit. Rather, they are a horn-driven rock band with upbeat tunes, memorable melodies, and a bit of punk rock grit. Why Though? is the 12-song debut album by this Chicago 7-piece.

The band throws somewhat of a curve ball with the opening track “Hopefully But Probably Not”, which starts off with an acoustic guitar and the deep, smooth vocals of guitarist Jacob Horn. Also, it provides a good segue into the the second track “Tinner”, a song that more or less defines everything about the Jacob Horn Trio. It is an upbeat, energy packed song highlighted by the horn section of Kendon Schultz, Brian Toms, and Steve Wasilczuk with high background vocals from guitarist Devon Kay during the chorus, and memorable lines like, “it never gets any easier”. On this song, Kay’s vocals perfectly compliment the lead vocals at just the right times. Songs like “Okay, Alright” and “Battery”, among others, are more good examples of how the background vocals enhance the energy, and draw attention to specific lyrics that get stuck in your head. Most of the time, the lead vocals are somewhat of a baritone delivery, leaning more towards the lower vocal range, though there are exceptions in songs like “Catastrophic” and “Fear and Minions”. Overall, it is the juxtaposition of the vocals that are highlight of this album, enhancing the energy tremendously.

As you can guess by the name of the band, most of the songs are lead by horn melodies, though it is not overdone and there are times where the horns simply fill the gaps in between lyrics on songs like “Nomads” and “I Heart ‘I Heart Huckabees’” (which also has a sax solo). On top of that, the rhythm section of bassist Jake Levinson and drummer Alexx Long provide the energy that I was hoping to hear when I first listened to the album. As a result, many of the songs are musically upbeat, though there are a few exceptions towards the end of the album, before returning to the somewhat staple high tempo on the last couple of songs.

This album was presumably meant to be a fun little project recorded in a basement that turned out to be a tight, high energy filled record with great songs and catchy melodies. Consequently, Why Though? is a powerful album, with many songs that are likely to become earworms for days.

The Filaments: Look to the Skies