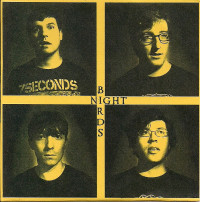 They might be the standard bearers of neo-hardcore in 2018, but when Night Birds first coasted to the shore in 2008, they were little more than another CD-R awash in the ocean of demos. Sure, they had Joe Keller of the Ergs! on bass, Brian Gorsegner of Psyched to Die on vocals, and Mike Hunchback of Hunhback on guitar, but in 2008, discogs and Wikipedia hadn’t quite become the data banks they are today, and frankly, the Ergs! resurgence hadn’t swelled to its full ambit, so the band really was passed around as a group of guys that were some other bands that you may have heard.

Inauspiciously, tucked in a yellow foldover sleeve, the demo CD-R was striking for its clear vision. Most band demos are a little messy, a little cloudy, and hint at what a band is capable of, but are mucked up by missed footing. Not so with the Night Birds demo. Right away the band made it clear that they were here to punk it up- surf punk riffs that threw back to Dead Kennedys, Agent Orange, and the Adolescents. Meanwhile, Gorsegner, despite being an east coast guy, defiantly adopted the crazed mania of the first wave west coast punk classics. 208 east coat punk was firmly set in metalcore and crust but Gorsegner opted to mix the caged mania of singer slike Keith Morris, Jello, and even a little bit of Darby. That is to say, Night Birds most masterful strike was their first- they remembered to keep the rock in punk rock.

“Paranoid Times” might be built up from a bedrock of 80s paranoia, but Mike Hunchback’s soaring riffs kept the tale of self-destruction sing songy, which of course, made the tune hit that much harder. Opener “Send Me Home” ripped along with the snap of Group Sex but as propelled by a distinctly OC melody. As an interesting note, the band was fully formed- “Can’t Get Clean” had an almost Devo-ish clank that would soon be washed away by the band’s other influences.

Still, Night Birds looked to their heroes for inspiration, but smartly, it was not a retro-show. Rather, the band cherry picked the highpoints of the ‘80s classics and meshed them together for a quilt of hardcore’s “Greatest hits” all while taking messages developed in the ‘80s that were timeless thoughts (Paranoia, mental damage) while avoiding the bland clichés (The government sucks, man!)

Night Birds hadn’t perfected their unique slice of hardcore- they would continue to refine the style through the present day (though Mutiny at Mucle Beach did find the band at full power, which continues through to their most recent releases). Night Birds weren’t born in total obscurity, but because they started out with a strong footing, but still had to build themselves up as mostly unknowns, likely was their greatest asset. Sure, it can be frustrating to not step directly into the spotlight after the demise of a previously well known band, but as their progression from the demo shows, some of the best things grow in the darkness, removed from the hot spots.