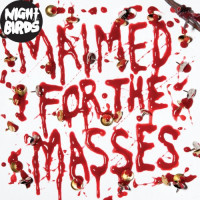 Perhaps more so in punk rock than any other genre, punk rock is infamous for its flash in the pan bands. To this day, a-many bands will release a killer demo and a very promising full length, only to shatter apart before a second full release, or to just not have the goods for a second banger. The cliché is that you have a lifetime to write your first album and nine months to write your second, and that particular adage has snipped its fair share of bands. Sometimes egos get the best of people, sometimes the pressure to follow up a modern classic is too much, and sometimes, people just aren’t ready to be punk rock darlings.

When Mained for the Masses was released in 2013, exactly halfway through Night Birds existence (to date), it didn’t seem like that big of a deal. Yeah, the band had some buzz. And cool, Fat was putting out the record (the band’s first for the label), which would mean some extra juice, but Fat puts out cool little EPs here and there and it often doesn’t mean more than that.

But with half a decade’s perspective, it’s clear what Maimed for the Masses really was- it was Night Birds standing their ground and staring the devil down. Having already released an excellent, if a bit uneven LP, the band refined their core strengths and washed away the rest. The EP was strikingly Spartan. One guitar, one bass, one drums, and one singer- and lots of space between them to boot. Even its cover, designed by Marissa Paternoster, was provocatively simple- blood and thumbtacks. That’s about the best way to symbolize the band there is, really.

“Maimed for the Masses” set the tone. Rolling, thrashing surf guitar unabashedly influenced by East Bay Ray- particularly Plastic Surgery Disasters- as contributed by new guitarist PJ Russo. Russo worked particularly well off founding member Joe Keller’s bass. Keller knew how to give a guitarist a springboard and provided the necessary rumbling back drop. It might sound easy, but it’s not. One has to have an ear not only for what is needed in a song, but what is also not needed.

Singer Brian Goresegner had worked to embrace the pop structure. Yes, he’s kind of screaming- but not too much- and yes he barks and hisses- but at the root, he’s following the ‘50s bopper pattern. There’s a reason why certain styles of singing have remained for decades and even centuries. It’s because they speak to the soul.

Perhaps in salute to Nervous Breakdown, the band put the extended jam on side A and closed out side B with three quick smashers. But, whereas “Maimed” was a mini epic, the b-sides found the band doubling down on pure punk attack. “Barred Out” blasted apart in the end in a firework of punk destruction. “Last Gasp” ruled back on the reins with Russo stabbing guitar that gave the band a bit more muscle and menace. “Boat Trash,” in lieu of just being “another” song, was a Ventures style instrumental- the point being each song was bold and had it own character. When they could have questioned themselves, when they could have fallen apart, Night Birds doubled down on their assets here without flinching, and in believing in their initial blueprint, the rose above the flash and buzz, and cemented themselves as modern punk classics. Not bad for a 7-inch.