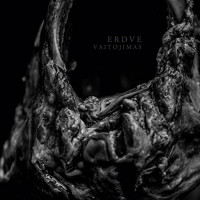 Have you ever thought about some of your favourite genres/styles of music, wondered what they would sound like if they were smashed together, but then realised it just might not work? I have, but maybe that’s just me. Anyway, I really dig hardcore, sludge/doom metal and death metal (amongst other things, obviously) but I had never really expected a band to openly try and meld the styles. Hardcore and doom seem a little too disparate in most instances for a start. So imagine my surprise when I heard about a new band (formed in the very recent past - 2016) who identified those 3 musical styles as being what they primarily drew from, and that make up the cornerstones of their sound. I remained sceptical, but was pretty excited to hear what they were coming up with.

What they have come up with is ‘Vaitojimas’. A 6-track, 37-minute debut album coming hot out of the Latvian capital, Vilnius. It’s pretty handy that I’m communicating this review in a written medium, because I’m pretty sure I’d struggle with the pronunciation of both the band name and album title otherwise. (Quite aptly, the album title translates as ‘gibberish moaning’ in the band’s native Latvian.) But putting that to one side, let’s focus on the music. Oh, man. This is good. Really good. Now I appreciate that isn’t exactly Pulitzer-level journalism, and I’m conscious that this is almost tailor-made for my musical tastes, but deconstructing the constituent parts that the band are bringing to the table, then I would still say that they’ve done a great job. Present and correct are the blistering, all-consuming periods of frantic heaviness (from the first second of the first track) that you get from death metal, the considered, elongated periods of dark contemplation that they draw from doom and the raw, untamed aggression that exists in all the best hardcore. I would argue that there is far less death metal than the other 2 styles on the record, but that’s no bad thing – as the resulting noise is far less confusing than it could otherwise have been.

So addressing my own concerns - does it actually work as a style in its own right? Again, I think it’s a success. The overall sound doesn’t feel contrived and in fact feels incredibly natural and organic. Admittedly the quieter periods do tend to pass back into the very heavy elements with little transitional period, but that only serves to enhance the intentionally caustic and fractious feel of these songs. The vocal style is certainly more hardcore than sludge (and certainly not black metal) and I think that’s probably a good thing. The at-times excoriating level of hostility would have been difficult to match with any other approach. Something that might also feel theoretically difficult is the prospect of very sustained brutality and aggression – because let’s face it, not many hardcore bands are routinely writing 6-7 minute songs – but that doesn’t seem to strain the output either. When the doomier, sludgier parts do arrive, they serve both as a respite from the bludgeoning hardcore, but because the quality of the songwriting is sufficiently high, then they also bring a really tangible sense of foreboding and menace. Krizas’ bass playing especially is a huge contributing factor here - see the last 2 minutes of “Isnara” for a great example of this.

So it’s pretty clear that Erdve have a fan in me. But even I can see that this absolutely isn’t going to be for everyone. There are many things here that some people struggle with – be it the ferocity of its visceral aggression, the song length, the repetitious nature of some of the sludgy sections – there’s enough there to have some people running for the hills. But listening to this a lot as I have, I keep coming back to the fact that the compositions work with what the band are doing, the delivery ticks the right boxes and although this isn’t perfect, for a new band, trying a style of music that doesn’t really have a scene at this point, I think this is of an excitingly high standard.