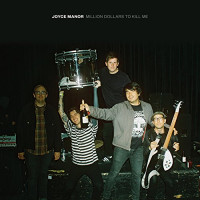 Having seen Joyce Manor live, it's one of those shows you want to go on and on because there are so many punchy punk jams in their arsenal. Across every record, there are at least six or seven songs made to mosh to and cut loose. I'll admit, while I enjoyed Cody, it's the first couple albums that really hit home for me, especially Never Hungover Again. I felt like that album was slowing down the tempo just a bit, and come Million Dollars To Kill Me, let's just say the dial's turned down even more. Is it bad? Of course not, but it's still not the punk-fest I come to expect with the Long Beach lads.

Lineup changes aside, this record does feel very much like a collection of Joyce Manor songs, except it's packed with the tracks you'd consider filler or middling material per album. There isn't much pop-punk per se, just a bunch of radio friendly alt. rock jams. That said, they pull it off well and clearly take lead from dance-y tracks like "See How Tame I Can Be" -- one of their oldies, but still a goodie. You can tell this is the direction off the bat with the first three songs especially "Think I'm Still In Love With You" and "Big Lie", but it's felt most of all on "Up The Punx" -- ironically named but still, one of their most fun ones yet.

Rest assured though, there are the pop-rock jams that fans of Weezer and say, Rozwell Kid, can rock out to showing that J.M. does know how to bridge that generation gap. The title track and "Silly Games" are great examples of this, which mesh well with acoustic tracks like "I'm Not The One" to paint -- and make no mistake about this -- a love record that's all about vocalist Barry Johnson's repeated heartbreaks.

All in all, J.M. have churned out a fun record -- bouncy, catchy, melodic as fuck -- but it lacks the impetus and edge of old. I'm eager to see how this array of tunes translates in the live setting though, because me, I personally prefer a high energy show where I can throw my frame around to "Leather Jacket", "Constant Nothing" and "Heart Tattoo". Still, as a fan who's ready to admit he's trapped in J.M.'s past, this album is a good step in embracing the future, even if the girl you love ain't there to return that hug.

The Dead Milkmen: Live in Ardmore