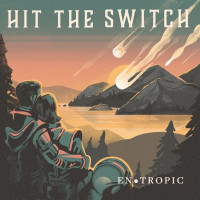 Hit The Switch have been relatively quiet for the past few years due other musical projects and life in general, but have returned with a vengeance on their newest album Entropic, where they toe the line between melodic skatepunk and thrash metal in a tour de force of powerful punk rock.

While there is a consistent sound that the band is striving for throughout the album, the songs themselves do not follow any particular formula, which keeps the audience honest and forces them to pay attention. Most of the songs are superfast with high toned guitars and vocals with metal-esque riffs peppered throughout. The opening track, “Perigee”, gives you a pretty good idea of how the album is going to sound. With blazing fast drums, ripping guitar leads, and a few hardcore type breakdowns between the vocals and some oozin’ aahs, the song provides a pretty good template for many of the other tracks. Songs like “Associative Forces” and “The Walrus and The Fisherman”, among others, use a similar sonic attack with shredding lead guitar solos and underlying metal riffs behind the vocals. Other times, the band leans towards melodic hardcore in songs like “Country Club Circle Jerk” that has a quick changing guitar progression and sets the tone for the following track, “Slaughterhouse 13”, which you know is a hardcore song right from the start.

While the lead guitar riffs provide a backbone for the desired sound on this album, there are other times where there is very little of this sonic formula. Octave-laden songs like “Down And Out”, “North Star”, and “Losing Reverie” contain a bit more melody than the previous mentioned tracks and are consequently some of my favorite tracks on the album. The speed and aggression is still noticeable, courtesy of the frantic (yet tight) drumming, but the progressions are drawn out longer, allowing the listener to really focus on the unique lead vocal delivery and the harmonies behind it. The slower, yet powerful, vocals on these songs are a perfect juxtaposition to the fast musical tempo and the Bad Religion-esque solos thrown in for good measure.

This was my first time listening to Hit The Switch. In particular, “North Star” was the first song I heard by this California 4-piece, and I was immediately blown away and consequently not surprised when I heard the other 11 tracks. After listening to just one track, just one time, I knew that the album would be down right amazing. Specifically, it was the passion and the power of “North Star” that had me excited to buy this record. While the guitar and vocal tones are high and sometimes gritty, the power is not sacrificed due to the aggressive, tight musicianship of all 4 members who are clearly experienced despite being on a 7 year hiatus as a band. This is definitely a memorable album, but it is also a record that will spark and hold your interest upon each and every listen.