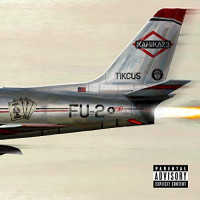 Eminem is mad as hell and he’s not going to take it anymore. It must be Tuesday.

Eminem’s last album, Revival, was a pretty big critical and commercial failure. It was not as bad as the reputation it got, despite its lineup of highly overrated guest stars (fuck Beyoncé), but the more introspective and vulnerable side of Eminem didn’t resonate, and the backlash raised a lot of questions about whether or not Eminem was still relevant in hip-hop music. Only eight months following Revival’s release, Eminem drops a surprise album to absolutely slay the critics who said he should get out of the game.

Well, not every song is about that, but a good deal of the album is centered around responding to the naysayers who doubted Eminem’s relevance, and he shows he’s far from done by pulling off one of the most technically proficient albums of his career. Eminem has always been a massive talent, and on Kamikaze, he’s just plain showing off, and in the best way possible. The rhythm of the songs and Eminem’s flow dramatically shift on a dime as Eminem challenges himself to be as rapid-fire and complex as he can.

The first two songs, “The Ringer” and “Greatest” might as well be one long song because it’s basically a nearly 10 minute pummeling of his critics. “Lucky You” featuring Joyner Lucas mostly works because Lucas has the lyrical ability to keep up with Eminem’s machine-gun style delivery. Then a series of two skits involving Eminem’s manager, Paul (these skits were more common on earlier albums to showcase Paul’s mock frustration with Eminem’s highly offensive albums, but we haven’t seen an appearance of Paul since 2009’s Relapse) in which Paul said that, upon listening to the album, he doubts the wisdom of making a whole album to attack the critics of the previous album, asking if this will be a trend and if the next album will be Kamikaze 2 in which he goes after everyone who didn’t like Kamikaze. In a follow up skit, Eminem says he won’t go after every single person who talks shit about him, but that he did find one critic on the Internet who particularly pissed him off and he has tracked down the guy’s house and is going there now, demonstrating that Eminem has a sense of humor about his own vendetta against his critics.

I usually call out artists in my reviews if they’re sexist, racist, homophobic, transphobic, etc. because I don’t think people should be let off the hook for that sort of thing. I normally give somewhat of a pass to early punk artists because of the different time period and the fact that they were trying to build a culture around extreme offensiveness. I usually give Eminem a wide berth, too, because I think I’ve seen him come a very long way from his early days where his outlandish offensiveness was a gimmick that he relied upon before he became the outstanding rapper he is now. But where my tolerance for him ends is on a track like “Normal,” yet another in a long series of Eminem songs about violence against women. It was one thing on The Slim Shady LP with “’97 Bonnie & Clyde” where the whole album was so outlandishly offensive, and the album kept referring to someone named Slim Shady who we couldn’t tell if he was a fictional alter ego or just another alias for Marshall Mathers, that the line between reality and fiction was blurry and hard to find. But the modern Eminem doesn’t usually live in the fantasy world that early Eminem albums and the Slim Shady “character” occupied, so the casual misogyny and domestic abuse featured in “Normal” ends up nestled between a set of songs about Eminem’s real life, leaving us with the uncomfortable question of how real “Normal” actually is.

“Stepping Stones” is an apology song for his bandmates from D12 regarding how he handled his relationship with that group. Since the song is trying to tell a story, it slows down a little to make the narrative clearer, making it a less technically impressive song than some of the others on this album. While I’m sure that this song is of particular interest to the other members of D12, I can’t imagine it being interesting to anyone else.

“Not Alike” sees Eminem teaming up with his other half from his rap duo Bad Meets Evil, Royce da 5’9”, to respond to rapper and illustrious star of the straight-to-iTunes movie SLC Punk 2, Machine Gun Kelly, who Eminem has had a simmering beef with dating back to 2012 when Kelly Tweeted about how hot Eminem’s then 16-year-old daughter was. The beef stayed out of both rappers’ music until Kelly made a comment during his guest appearance on a Tech N9ne song that was thought to be a subtle jab at Eminem. “Not Alike” not only sears Kelly with clever insults, but Eminem also forces himself into complex and difficult rhyme flows to demonstrate how much better of a rapper he is than MGK. Since the release of the album, Machine Gun Kelly has released his response to “Not Alike” called “Rap Devil,” to which Eminem further responded with the diss track “Killshot.”

The title track, with its bouncy, carnivalesque tone, and “The Fall” with its more subtle complexity, allow Eminem more chances to show off. The two-part song “Nice Guy” and “Good Guy” offer a much softer treatment of women than “Normal,” but is ruined by the painfully screeching voice of Jessie Reyez. The closing track, “Venom,” from the soundtrack to the movie of the same name, manages to be both appropriate for the movie and in keeping with the album’s overall theme.

For all of Eminem’s usual offensiveness and the few songs that don’t quite work conceptually, Kamikaze shows off more technical skill than any previous Eminem album, as Eminem puts on an absolute rap clinic to back up his claim that he’s the “greatest in the world.” Even if he isn’t the greatest, he proves that he’s in the upper echelon, and that calls for his retirement were premature.