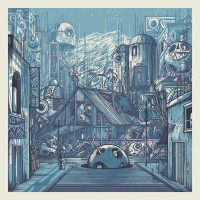 Restorations don't just have a musical discography, they have an opus that ranges from the backdrop of Philadelphia and its punks, to young men-turned-old who braved the rigors of life with their hearts on their sleeves in the outside world as they grew older. They make art, poetry (loudly so at that) in the truest sense of the word, and nothing embodies this notion more than 2013's LP2. It's a benchmark that ranks in my top 20 records of all time and which LP3 valiantly strived to imitate just a year later. A solid attempt but short, nonetheless. But as with all good things, patience pays off and LP5000 is just that, a wait that's worth its weight in gold.

That aside, you'll probably see me referring to LP2 and its tracks here a lot because like I mentioned... it's a truly golden standard. As for this new album, it offers the band's best sense of self and also, their closest attempt at touching the sun and catching that fire from five years ago. Only this time, it's not about loud, punk jams like "D" or expansive, bellowing tracks which would resonate with The Gaslight Anthem fans a la "New Old".

Instead, Restorations have mellowed things down to a more melodic, catchy and oh-so accessible vibe. In fact, this is their most punchy record to date with seven tracks clocking in at just under 25 minutes. Yup, there are no long sprawls like the old days, and for whatever reason, this approach works wonders. Of course, it helps when you've got a songwriter like Jon Loudon whose strategy is to simply converse with you on the mic, balancing it well with all the stories he has to tell.

Take "Nonbeliever" for example, probably the best track on the record, and it's a picky, mid-tempo jam that seems to focus on politics, religion and relationships. It's conversational as I mentioned with Loudon adopting a call-and-response shtick with the audience, quickly switching to address the man in the mirror at other times. I'll be honest, the lack of punk sensibility took me aback but listening to the record as one complete novel places tracks like this into perfect context. It's slow, yes (signaled off the cuff with "St.") but simplicity is a formula that works, and when Restorations do simplicity, well, let's just say it's pretty fucking dynamic.

Case in point, "The Red Door" which has some of the band's best guitarwork to date. And make no mistake, this record is a guitar-driven one. Loudon's gravely-voice soars on and on, and has as big a presence as ever on cathartic choruses like this, connecting you to his take on social justice. In this case... it's gentrification and the city landscape he sees being quickly eroded away. In fact, he brings this back up on 'Remains" as if to serenade Philly goodbye. But it's the way he does it -- not too loud, not too aggressive. He's lamenting, pleading and voicing his regret in a defeatist manner.And I think that's why this record is so dialed back; from the twinkly essence and slow burn of "Melt" to "Caretaker" (which unfolds a la "Civil Inattention" and feels like an LP2 B-side). It's about accepting your losses.Side note: this was the record I felt should have followed that album as it feels like an organic extension of it. Back to my point: yeah, the album is about accepting the world won't change the way you want it to, no matter how much you're emotionally and physically invested in making this happen.

"Caretaker", in particular, feels like Loudon's a failed caretaker on this mission to save the soul of the place and people he loves, wallowing in self-pity and in grief over the city's self-deprecation. And here, it's all built on melodic pianos and slow drum beats. It's as if he can't stand how greed has triumphed and worse yet, people are celebrating it. He doesn't need loud noise, he wants something slow, piercing and rhythmic for his words to sink in. Is he pessimistic? Cynical? Nah, I'd say more a pragmatist.

As the record winds down, this piano soundscape trickles through to the closer, an accessible tune called "Eye", which speaks of the witness, someone watching the world die. It's as honest, sombre and as vulnerable as you'll hear Restorations waxing, and if you're a fan of The National, well, you're going to love it.
In closing, the best way to describe Restorations' direction is that they're a band whose music here is as comfortable in its old skin as can be, but who chose to evolve, shedding and shredding to create a musical aura that somehow manages to feel brand new. Now, that's musical genius that, well, you just can't fake. Then again, Restorations has been nothing but authentic in a world where music is often insincere and feels like a product. Not with these guys though, it's as real as you could get.

The Distractions: Sometimes I Drink