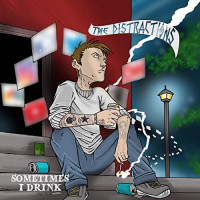 South Bend, Indiana’s The Distractions first made their way onto my radar earlier this year with their split with the Grand Rapids, Michigan band Another One. Their three songs on that split were all great, and they’re all here on Sometimes I Drink. It’s always a good sign when you know you’re going to enjoy 30% of a record before you listen to a single note.

One of those familiar songs, “21 Questions”, starts things off. I love the lyric “We’ll never be too old to party/We’ll always be too young to die”. The Distractions are definitely a young pop punk band, but they seem directly linked to the 90s. In other words, they skipped over most of the Blink-182/Good Charlotte/Simple Plan type of stuff that most of us old schoolers hate. Musically it reminds me most of Face to Face, but the singing is more disheveled than that. Think maybe Screeching Weasel or Rhythm Collision. (Does anybody remember them?) “Not Okay” is definitely Face to Face-ish. “No More Time” is a little more serious and contemplates aging. “All the Same” might be the catchiest song on Sometimes I Drink. It’s the one that gets stuck in my head the most.

“Hangover” is another familiar favorite. I enjoy how its lyrics lead seamlessly to the next song, “Remember Me”. “I drank way too much I just want to die” becomes “If I die today will you remember me”. “Most of It” is the third song I recognize from the split. “Answers” might be the second catchiest song on Sometimes I Drink. Someone different handles the vocals on album closer “TRUMP”. It’s a good song, but I’m afraid two years into this presidency these type of songs are at risk of becoming a cliché.

Sometimes I Drink clocks in at under 23 minutes, so there’s really no room for filler. You can listen to it over and over. I rolled around with it in my car for a couple of weeks, and it hurt me to finally take it out. The Distractions have made one of the best pop albums of the year, and are another entry in the long list of Midwest bands that deserve a bigger audience. Check it out.