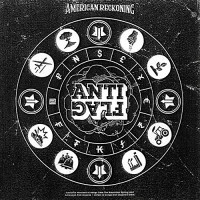 When I saw Anti-Flag (or rather Justin Sane and Chris #2) play an acoustic set a few years back for the Rock Against the TPP concert, I was skeptical that Anti-Flag’s music could be translated into acoustic songs. They proved my fears wrong with some really delicate and beautiful renditions of their loudest punk songs. In particular I was impressed by their acoustic version of “A Fabled World.” Well, American Reckoning, which is mostly a collection of acoustic versions of songs from their unofficial double album, American Spring and American Fall, lacks that acoustic version of “A Fabled World” for some reason, but it features some great acoustic translations of their songs…and some pretty weak ones.

The first track, the acoustic version of the climate change anthem, “The Debate is Over (If You Want It),” is by far the most beautiful translation from electric to acoustic, adding new melodies to the song and maintaining the important message of the song. “Trouble Follows Me” was never that significant of a song to begin with, but makes for a decent acoustic version. “American Attraction” was an abysmal electric song that finds some redemption in an improved acoustic version. “Racists” rather undercuts the biting criticism of the original by focusing on pretty melodies. “Set Yourself on Fire,” my personal anthem of 2015, is probably the most poorly translated as the band pretty much just tries to play the electric version on acoustic instruments. “Brandenburg Gate,” however, really gains a much appreciated subtlety that stands in contrast to how big the original is.

The last three tracks on the album aren’t acoustic tracks, but rather cover songs, which produce very mixed results. John Lennon’s “Gimme Some Truth” comes off as repetitive and grating, although that may be the fault of the original (I can’t stand most of Lennon’s solo work). Buffalo Springfield’s “For What It’s Worth” is perfectly suited to Anti-Flag’s political punk style. Lastly is Cheap Trick’s “Surrender” and, while that’s a great song and Anti-Flag is a great band, the two of them really don’t go together.

American Reckoning is an uneven project from start to finish, but there are certainly enough gems to make it a worthwhile listen. Some of the acoustic songs will become my new favorite versions of the songs, but some don’t stand up to the original. Still, I recommend giving it a listen.

The Distractions: Sometimes I Drink