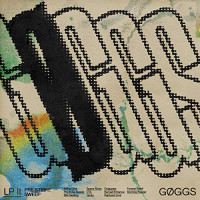 2018 is proving to be another prolific year for the ever-restless Ty Segall and his constantly revolving collaborators and cohorts. Having blessed the world with the genre fusion of Freedom’s Goblin and charmed listeners with the Kinks worship of the White Fence collaborative album Joy, the world is now subject to the acrid slash and burn of Goggs new album Pre Strike Sweep. Fuzz and Ty Segall Band’s Charlie Moothart returns on drums with Segall and Ex-Cult’s Chris Shaw both on guitar. The new album follows the eponymous 2016 collection and features Michael Anderson joining on bass. Ty Segall self-produced this raucous set of primordial stomp.

Pre Strike Sweep begins with an ominously plucking acoustic guitar before descending into caustic slashing on opener “Killing Time.” From there, an overblown bass propels Chris Shaw’s bellicose shouting through an aggressive garage stomper with the guitars kicking into an oscillating phaser attack. The title track bears an infectious riff and snarls and spits while “Still Feeding” boasts a buoyant bass and a Zeppelin aping guitar walkup. “Space Rinse” careens continuously into clamoring commotion before settling into a Sabbath-style sludger. “Cta” utilizes a blaring alarm clock in lieu of a guitar solo, while the rest of the album witnesses how far these guys can grind and strangle their instruments. Chris Shaw barks and brays over the band’s tangled turbulence for the duration of the album. Pre Strike Sweep’s stabs at discordance most closely hue to Ty Segall Band’s earlier atonal album Slaughterhouse.

Pre Strike Sweep is another sturdy set of biting garage rock with enough variation on formula to keep things interesting. If it never quite reaches the heights of Freedom’s Goblin or the wacked out ebullience of Joy, it proves these conspirators can continue cranking out reliably harsh rock and roll.

The All Brights: The White Album [EP]