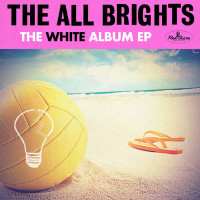 The All Brights have returned with another wild ride on their newest release, The White Album EP. I’m not sure if I’m supposed to take this seriously, but it’s hard not to because it’s so damn good. Even the title is purposely confusing. Let’s be clear though, this is a novelty act, but the band may say otherwise.


Most of the songs on this 6-song release evoke images of corny ‘80s movies or satire of modern life. The first track, “Maximum Hangtime”, for example, takes you through the volleyball scene in Top Gun and it references other movies like White Men Can’t Jump. Musically, the song is reminiscent of Big Wave Dave’s other band and the duel vocal approach and harmonies work well with Mattsimum Waves, who has a similar singing approach. The next track, “Last Blue Text” is just as witty and once again purposely corny. It is a song that mocks the antisocial nature of modern relationships and ends with a nod to The Misfits, though I don’t think we’re supposed to say that. Danzig might find out. Next, “Midwest Fuck Me”, is a deliberate departure from the punk rock sound of the first two tracks, as it mocks the evolution of white reggae. With a memorable chorus, a walking bass line, and a sick reggae beat by Shreddin’ Sean, the band takes you through a flawless song, with some Jamaican accented throat singing, which adds to the fake authenticity.

The next two tracks return to the punk rock attack with “The Ballad of Me and My Funds”, a song about trust fund douche bags, and “Stand Up Pat L. Board”. Both songs are full of great melodies and clever lyrics. Bassist Pat L. Board aptly takes the lead on the latter song, a tune that could easily be a modern sequel to Point Break, where the paddle boarding hero takes on those bullies on the short boards. I particularly love how the bass line in the last chorus changes a bit and brings the whole song together. The final track, “I’m Buying a Boat”, is ukelele song about a guy and girl who’ve simply had enough of each other. He’s buying boat and sailing away and she’s just fine with that.

This is obviously meant to be a fun little project that turned into another fun little project where some punk rock veterans got together and played some catchy, witty tunes. And while it’s not meant to be a serious venture, the band definitely takes it seriously. The songs are very carefully written and extremely well thought out, which makes for a great little album.