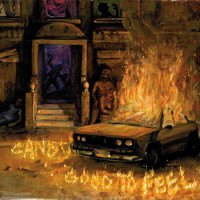 Despite the fact that Candy's name is a Velvet Underground reference - a rare influence not usually found in the hardcore scene - the irony of their moniker should not be lost on the casual listener. Actual candy is supposed to be sweet and light-hearted, meant for children. But Candy from Richmond, Virginia, are none of these things. And it's this  juxtaposition of innocence and perversion that Candy uses to keep listeners squirming with unease and dread.


Drawing influence from Integrity and other bands of their ilk (Living Hell, VVegas, Blind To Faith), as well as bands of the Japanese Burning Spirit scene (Death Side, Judgement, GISM), Candy, with their new LP Good To Feel, has created one of the most jarring pieces of hardcore punk I've ever encountered.

So it is hardcore? Yes. But it's also punk? Absolutely. Well, is it metal too? Definitely. Candy is one of those rare bands not defined solely by their influences, genre, or scene. Candy is simply a force to be reckoned with and given a wide berth.

Bookending by shrieking feedback and unsettling noise, Good To Feel pummels the listener relentlessly with track after track of filth-encrusted, primal aggression. I'd liken them to post-2000 Integrity covered in blood, rolling around in a pit of manure and snapping, rabid dogs. The guitar tone is a wall of violence, the rhythm section an unshakable jackhammer, the vocals a shredding glimpse into a rotten mind. Of the nine tracks, the first eight put on a punk rock clinic. Candy shows listeners that they don't really know what punk rock is capable of - not until they've experienced Good To Feel. The album's closer, "Bigger Than Yours," takes the audience on a strange Pixies-inspired, noise-drenched detour - but one that packs just as much disquiet and menace as the rest of the record.

Good To Feel is the best hardcore record I've heard this year. For me, I doubt there's anything coming down the pike - not even Terror's latest - that will soon take the place of this primitive, haunting, and bestial punk rock masterpiece.

The All Brights: The White Album [EP]

We Were Promised Jetpacks: The More I Sleep The Less I Dream