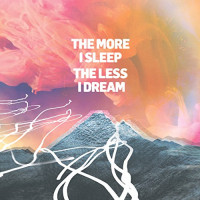 Scotland's We Were Promised Jetpacks have been one of my favorite indie-rock bands of all time. I loved their raucous, infectious jams like "Quiet Little Voices" (and yes, I marked out seeing it in Hall Pass), as well as how the band seamlessly flows from calm lulls to boisterous head-banging rhythms (a la "It's Thunder and Lightning"). Over the years though, things have progressed in a more quiet, dialed-down manner -- not to say it's a bad thing. Come The More I Sleep The Less I Dream, WWPJ I'd say have shifted towards a more dreamy, indie-rock style that, while it's less aggressive, is still worth the listen. And then some.

Their musical spine here feels a lot like the shoegaze-pop soundscape their countrymen Mogwai have been drawn to over the years. You can tell from the dancey rock songs like "Hanging In", "In Light" and "Someone Else's Problem" that they're all about the narrative and poetry vocalist Adam Thompson wants to work in. Sure, now and then they tease the bombastic nature of old as per "Impossible" but as much as the opening track here builds and builds, that explosive ending just doesn't come. And this does leave you wanting some more loudness a la These Four Walls and In The Pit of the Stomach -- the latter of which had them at their most rowdy and oh, so fucking fearless nature.

Nonetheless, you do have fuzzy guitars and frenetic bouncy melodies on a few songs such as "Repeating Patterns" that feel nostalgic but which you can tell are just nods to a road they've driven away from. 2014's Unraveling more or less pointed in this twinkly shoegaze-rock direction (which fans of The Twilight Sad would gravitate to) and honestly, it's a skin they wear well. But admittedly after all this time, it still takes some getting used to. That said, WWPJ, keep doing whatever you're doing.