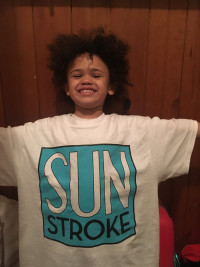 The LP itself has a very atmospheric tone to it. The production here shines as the songs flow along, none exceeding three and half minutes in length. The tone is scaffolded by a bevy of guitar and drum tracks that give Sunstroke’s sound a very open feel. I was reminded a few times of Touche Amore’s early recordings in this respect.

The record’s fourth track, “Complaint Department,” moves at just beyond mid-tempo, employing feedback that is reminiscent of the great late-80’s Dischord Records sound. Coupled with a just-distorted-enough bass line, the song offers an offbeat but melodic rhythm. The vocals work as a great complement to the chugging rhythm guitars, and the lyrics don’t inundate an otherwise ambient song with wordiness. In fact, just as the song seems to head into a somewhat repetitive structure it ends abruptly. And that abruptness is both clever and apt.

“Six Years Tears” is another standout on Second Floor/Seven. It’s a bit more austere than some of the other songs, but still offers up a great octave guitar lead that steadies much of the song. The vocals once again don’t overpower anything here. Instead, the song showcases vocal patterns that are offbeat but not completely dissonant. The patterns instead draw out on single words and phrases, creating a much more powerfully emotional delivery. The song’s closure opens a melodically driving breakdown and chorus that will satisfy anyone who appreciates a bit of depth and dynamics in their hardcore punk.

The ninth song on the record, “Revival,” is what really drew out the aforementioned Hot Water Music comparison. Suntroke deliver a catchy opening lead, only to head into another ring-out and bass driven verse part. The vocal repetition of “breathe new life into me” laid over the music draws out a powerful mood as well here. And just as quickly as the song opens, it’s over. But, again, I think Sunstroke makes that play in their favor.

Second Floor/Seven is an ingenuitive and industrious debut. There’s no two ways about that. While there will be comparisons made to Touche Amore, La Dispute, and even Modern Life is War, Sunstroke manage to set their sound apart. There’s an emotional delivery to the songs on this full-length that is hard to capture on recording, and even harder to manufacture artificially. For all intents and purposes, Sunstroke identifies with the hardcore scene and yet they offer much more than that on this full-length. There is melody, ambience, and passion throughout Second Floor/Seven, and none of it comes off as hokey. A very strong debut indeed.