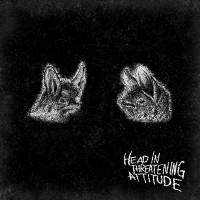 In 2016 and 2017 the UK’s Natterers released two very compelling EP’s respectively. Then the band announced that they would be releasing their first full-length Head In Threatening Attitude this year. This was the real test. The big leagues. Could the band solidify and master their sound enough to crank out a fantastic hardcore album and live up to the great work they did on Demo ’16 and Toxic Care? The answer to that question is, “Hell yes!”

If you’re not familiar with Natterers yet, Head In Threatening Attitude is actually a great place to start with their material. The first track, “Power Tripping” is a really good representation of what the band’s overall sound is like and what they’re all about in general. Lead vocalist Emma’s extremely hard-hitting yells are complemented by guitarist Thomas’s shrieking surf-influenced riffs, while the bass and drums maintain a swift and tight rhythm.

Emma’s vocals on this record should really place her up at the top tier of contemporary hardcore vocalists. Just like “Power Tripping,” other tracks such as “Boring Minds” and “Fix The Fixation” also include her powerful yelling. In a bit of twist though, there are tracks like “Germs And Creeps” and “Not Long Left Now” where she sort of walks the line between her signature yells and melodic singing, which up until this point had not been featured on a Natterers release before. It’s a very welcomed surprise that she pulls off quite well.

Another major part of the band that carries the songs on Head In Threatening Attitude is Thomas’s guitar technique. It’s the backbone of the majority of the tracks, really. His style lands somewhere in between that of East Bay Ray of the Dead Kennedys and PJ Russo of Night Birds. He is able to mix 80’s West Coast hardcore with surf riffs extremely well in his own unique way, which in turn makes them a large part of what makes each of the fourteen songs distinct from one another. A perfect example of this is the track “Appetite For Distraction.” Thomas’s high-treble and high-distortion licks follow Emma’s vocals (along with the bass as well) making for a very cool contrast. In “Please The People” his massive power chords are accented by quick fills, and screaming high notes later on.

Natterers threw couple of unexpected curveballs into this album, too. They included a rerecorded version of “Defiant (Again),” which was originally on Demo ’16. This version seems to be a bit more polished than the original, but the band did it justice and gave this rowdy track a nice update while still keeping true to the song. And Natterers end Head In Threatening Attitude with their first cover. “Theme Song” by Flyboys is actually an instrumental that fits perfectly with the band’s surf/hardcore sound. It’s a great way to wrap things up.

Natterers’ first two EP’s really showed that the band had a ton of potential. But what would a Natterers full-length be like? It turns out that they not only had that potential, but they blew expectations out of the water with Head In Threatening Attitude. The fourteen tracks move incredibly fast and all sound different under the umbrella of the band’s overall sound. This album makes it clear that Natterers is one of the outstanding, up-and-coming hardcore bands of 2018. Do not sleep on this record!