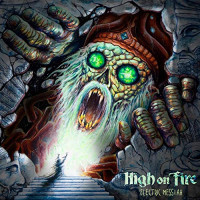 I met Matt Pike once. Not to interview him sadly, but in a pizza place. It was just over the road from the Scala in London’s King’s Cross – where Matt, Jeff and Des were going to be going on stage an hour or so later. I was sat having a pretty decent bit of pizza (something I would not normally be distracted from), when out of my peripheral vision I spotted a mountain of a man; clad in leather and denim and heading to the counter. As it dawned on me that it was indeed Matt, I thought I might just say hey. He wasn’t eating or anything, so I figured it shouldn’t be too much of an intrusion, but I was still wary as he’s a huge, metal monolith of a man who spends a pretty decent amount of his time thrashing the shit out of his guitar and screaming about death, demons and the occult. I needn’t have worried. He was super cool, said thanks when I mentioned I was coming to see the band and even looked uncharacteristically jovial when a friend of mine got a phone out to take a photo of the two of us.

But that’s just for context, really. I’m here to talk about the new HoF record – Electric Messiah. If you’re reading this, then there’s a chance you’ll have heard the lead single of the same name by now and also a chance that you’ll have read a little bit about it. In short, it’s an homage to Lemmy. I can see why Matt was compelled to write it, as well. For a long time, he’s attracted a lot of Lemmy comparisons – some of which with pretty sound reasoning, in fairness. They have/had a similar look, they both represent a pretty perfect embodiment of bad-ass rock ‘n’ roll/metal and have both been incredibly prolific over their careers. However, in Matt’s own words “The song is me telling the world that I could never fill Lemmy’s shoes, because Lemmy’s Lemmy”. The song itself is something I can only imagine the late Motorhead legend would have approved of, too. Fast, brutal and uncompromising. Ironically, in spite of Matt’s comments, it actually sees him at his most Lemmy-ish in some time.

At 4:15 in length, Electric Messiah is one of the more obvious single choices from the record. In total, the record clocks in at 9 tracks and just under the hour mark, so it might not be a surprise that there are a couple of true epics on display here alongside the more succinct attacks. The 2 tracks in question are ‘Sanctioned Annihilation’ and the conceptual piece ‘Steps of the Ziggurat/House of Enlil’. Pike has even referred to the latter as a “Sumerian rock opera” – written about the creation story of the Sumerians, involving battling gods and Pike playing 3 characters within the song’s narrative. As theatrical as that sounds, we’re not moving drastically away from the classic HoF sound, only applying it to something more ambitious. The song itself isn’t vastly different in tempo or tone to the title track of 2007’s Death is this Communion for example, but takes a bit of unpacking and re-listening to really get the most out of, and that is pretty impressive of a band who are now 20 years into their career.

Outside the 2 lengthier and slower-burning tracks, it does feel somewhat like Matt has scratched his itch for the sludgier compositions by way of Sleep’s Sciences that came out only 6 months or so ago, thus giving more focus to the thrash/doom crossover sound that HoF have really made their own over the years. Personally, this is my favourite version of HoF and Kurt Ballou’s production work is absolute perfection for it, too. Although this is the 3rd record Ballou has produced for the band (after the last 2 records – 2012’s De Vermis Mysteriis and 2015’s Luminiferous), this feels like the best fit to date. It feels tight, without feeling compressed, raspy and raw, but without feeling rough - with Jeff and Des’ bass and drums respectively bringing ominous throbbing, sinister rhythms and full-speed gallops across the record – and although there’s great variation, they stay within the same style enough to give the album a distinct feel from front to back.

As much as I love the record, I do concede that it’s not perfect. The flipside of the band feeling like a more distilled version of themselves than in recent years, is that it could (playing devil’s advocate) be argued that outside the 2 epics, this is a more straightforward record than some of their other efforts. But my counter would be that there is enough on either side of the ‘classic vs experimental’ scales that mean I just can’t imagine any HoF fan being disappointed by the record. The title track, plus ‘Spewn from the Earth’, ‘God of the Godless’ and ‘Freebooter’ are among the most satisfying HoF high tempo tracks of the last 4-5 albums and the quasi-prog that crops up (both thematically and musically) holds my attention throughout and stops it from feeling too one-note.

I couldn’t really sign off this review without reference to Matt’s soloing, though. Matt’s never been a man to shy away from a solo and they’ve been deployed to various degrees of effectiveness over the years – but his efforts across Electric Messiah are his most focused and direct in some time. They’re still fast, furious and at times off-kilter, but they’ve clearly been meticulously penned to fit with the tone of the songs they’re attached to. It’s not easy to make such ‘runaway train’ style solos fit backdrops cohesively, but it’s something Matt has pretty much mastered at this point.

Matt’s been pretty effusive about his feelings for this record. It seems that as he and the band have grown, they’ve become more comfortable. Matt has publicly had his troubles in recent years as well, but on Electric Messiah, we find a band who are organically in sync with their sound, their producer and each other; giving birth to a jagged, arcane, black diamond of a record.

Yowler: Black Dog In My Path