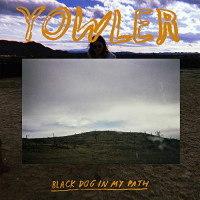 Yowler's the solo act of Saintseneca's Maryn Jones and at first glance, it's something you might think is a side project of Hop Along's Frances Quinlan. Obviously, when her vocal intonations sink in, you'll tell the difference but the raw indie/folk power on tap here really feels like Quinlan stripped down, with a bit of Waxahatchee mixed in. Jones' previous music was tempered down a lot but what Black Dog In My Path represents is freedom and breaking free from restrains of old in ways that musically, well, it's just a richer and more accessible direction to go in.

The songwriting, as expected, feels like poetry in the wind with her minimal style of old working well with her lyrics. "Awkward" and "Angel" are examples of these gentle, warm and oh-so comforting acoustics. But on dirtier and louder songs like "Where Is My Light?" and the dance/electro-pop of "WTFK" you can tell Jones just wanted to make music she enjoys, whether they influenced her or not. The hard-rock, fuzzy reverb feels like something you'd hear from Nothing, Japandroids or Cloud Nothings, but she quickly goes back to strings, keys and flutes (as per "Holidays Reprise") to pay homage to old roots. And in so doing, you get a more comprehensive snapshot of her ambition and overall novel. Trust me, this is a great album for introspection as the year winds down. It's a shot of Elliott Smith-meets-Laura Stevenson that you rarely find these days, for good measure, although I would have liked for a lot more hard-edged and louder jams.

Swearin': Fall into the Sun