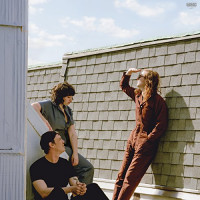 “High school summer vacation / on heavy rotation / it spills through broken PA speakers / we are all older now / and the same things get us going / at least I can admit it,” confesses Allison Crutchfield over her scratchy guitar strum introducing the listener to the first new Swearin’ record in over half a decade. It’s an auspicious opening line to an improbable reunion. One the members of Swearin’, rounded out by co-vocalist and guitarist Kyle Gilbride and drummer Jeff Bolt, didn’t even expect. Originally ending the band alongside the dissolution of Gilbride and Crutchfield’s relationship, the members of Swearin’ have found a new way to make the band work and returned with Fall into the Sun.

Fall into the Sun captures the intermittent years. The album tells stories of cross-country moves, belongings split across ex-lover’s houses, and guarded adult recollections still grounded in young love’s romanticism. It also recognizes home is where the power chords were strummed. On “Treading,” Gilbride asks, “Why do I fight it?” shortly before answering his own question with “love’s just a piece of the puzzle now.” It’s hard not to read what you want out of the lyrics if you are familiar with the band’s story. Crutchfield and Gilbride’s lyrics complement each other despite their differing writing styles. Crutchfield is direct, often using clever descriptors like in “Margaret” stating, “you and I exist / like suburban kids making up a Christmas list / the possibilities are endless.” Gilbride utilizes more metaphors in his contributions.

The lo-fi indie pop-punk of past releases returns although updated with hints of festival ready hooks. The awkward 3-minute build of “Stabilize” all becomes worth it when the band launches into the final section sounding as if Matt and Kim added guitars to their electronic breakdowns. “Smoke Screen” and “Future Hell” move towards comparisons of Built To Spill and The Pixies. In the closing of “Future Hell” especially, the blend of Crutchfield and Gilbride’s voices recall classic Pixies’ melodies. Bolt keeps things moving with simple, bouncy drum beats. His drumming cuts through the thick guitar haze while also grounding the band in their pop-punk roots like on “Oil and Water.” For those who miss Modern Baseball or The Weakerthans, this album is worth a spin.

Fall into the Sun is a record that exudes contentment despite the constant distance it centers. One would have to imagine part of this is by necessity. To come back together after all the miles travelled apart recognizes that there’s a reason yesterday’s memories are held so close. As Crutchfield notes on opener “Big Change,” at least Swearin’ can admit the best years of their lives were found in some stranger’s basement, even if there’s no going back now.

Yowler: Black Dog In My Path

Against Me!: live in denver