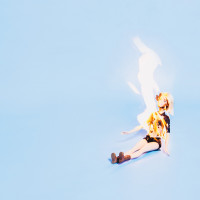 Burning a picture down to its ashes signifies release, a permanence of an ended relationship. Throughout pop culture, it’s become a notorious image for moving on from a toxic individual in your life and for some, in practice, has become a cathartic action of acceptance. The act of burning the images that make up your past is an understanding that you are no longer holding on to it. On Well Wisher’s debut LP This Is Fine, the doll burning on the cover is an important image to understand what’s within.

The album opens up with a thunderous guitar riff wrapping in and out of “Believe.” Right away, you’ll notice the crunch of the guitars. It’s hard to miss with the heights of the aforementioned riff. Throughout the album, the guitars move between distorted, hazy bends and drones to authoritative 90’s crunch. It recalls contemporaries like Charly Bliss, albeit without their caffeine drive. The bouncy pop-punk of “Leave Me Like You Do” and plodding lows around the snap of the snare drum in “Why Not You” will have you recalling Four Minute Mile-era Get Up Kids. In fact, the indie-punk of the 90s is not a bad reference for the band and one Well Wisher acknowledge.

Halfway through the album, you may find yourself stumbling upon a familiar lyric. In the bridge of “I Know Better,” the band drop out letting singer and guitarist Natalie Newbold deliver a Jawbreaker homage singing “what’s the meanest you can be / to someone you say you love” as droning guitars take over. It builds till the close with her belting out the title. The lyrics are filled with same type of deadpan observations about relationships and the scene found on Jawbreaker’s material, albeit with a 2018 update.

On “Leave Me Like You Do,” Newbold sings about the tangling of scene politics and relationships, unpacking hidden internet comments meant to intentionally damage. The title and “Right As Rain” play off the This Is Fine meme with the chorus of “this is fine / just a temperamental time.” “Half Bad” notes “my world’s on fire / and I’m left smiling / thinking of you / it’s not half bad / my world fell apart / I’m failure’s art.” It’s a deftly loaded closing couplet.

All of this brings us back to the doll burning on the cover. Newbold originally started this project solo following the breakup of her previous band The Dollys, a breakup that came with the end of a relationship within the band. This Is Fine captures that. It listens like a complete piece of art sharing a story that is as permanent in its resolution as the cover suggests. In fact, one might enjoy this over a sip of tea.

Against Me!: live in denver

So It Goes.: Sex Machines Without Sex