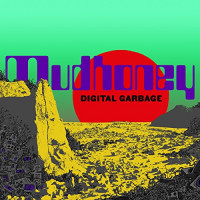 Digital Garbage is Mudhoney’s fifth album on Sub Pop after their return to the label in 2002 and 10th overall proper album. It follows the LiE (Live in Europe) album issued earlier this year to commemorate the band’s 30th anniversary. The new album is an acerbic takedown of the pervasive obsession with online culture that has infected American life. Mark Arm, guitarist Steve Turner, bassist Guy Maddison, and Dan Peters have just the antidote for our solipsistic tendencies with a dose of blunt and brusque rock and roll.

“Nerve Attack” revs up a “Dirt”-inspired bass riff and Ron Asheton slashing as Mark Arm laconically verbalizes a chemical assault on his cerebral cortex. Despite the grungy onslaught, “Paranoid Core” more closely tacks off a list of Misfits-style modern horrors including racism, homophobia, and sexism that “feed on [the] fears” on the conservative ruling class. “Please Mr. Gunman” humorously offers a sarcastic “humble request” for a would-be active shooter to please postpone his attack until Sunday’s religious services so the faithful can assure their ascension to heaven while praying for forgiveness, since at the mall they’re consumed by materialism and at school they are tempted by the knowledge of evolution. The band are also up for some expansion to their Stooges sludge with the woozy slide guitar and nauseous organ of “Kill Yourself Live,” as Mark Arm encourages a wicked ploy to garner some more likes on social media.

“Night and Fog” is an eerie Nick Cave marriage to Funhouse guitars and serves as a cautionary tale to the impending doom surrounding the erosion of civility. “21st Century Pharisees” calls out “evangelical hypocrites” and lampoons attempts to justify supporting reprehensible candidates with Arm bellowing that “there’s no blessing that can wash away that stench.” “Hey Neanderfuck” takes a surprisingly curt attitude toward drug abuse as Arm proclaims that “all the Oxycontin in the world won’t make your pain go away” and snidely thanks his target for “inflicting your misery on the rest of us.” “Prosperity Gospel” mocks the success of wealth attainment at the expense of future sustainability and the inevitable destruction of the planet. Arm bellows “Get Rich! / You Win! / Fuck off!” The track also boasts a tacked on meandering Dum Dum Boy guitar solo to punctuate the rest of the primordial rock.

“Next Mass Extinction” swaggers in on a demented Aerosmith riff and harmonica as Arm reveals that “nothing will replace us” when the fruits our wanton destruction come to bear. Halfway through, the track kicks in with a searing guitar line as the band gallops into an apocalyptic boogie. Going out with some escapism, “Oh Yeah” offers some respite from the derision of its predecessors as Arm hopes for some escape through skateboarding and biking.

Digital Garbage doesn’t parse words and favors lyrical directness over ambiguous wordplay. Mudhoney want to make very clear that the target of protest is identified and properly foisted upon the gallows. It’s another strong release for a band that has remained remarkably consistent and shows new vivaciousness in Arm’s fertile dark humor.

So It Goes.: Sex Machines Without Sex