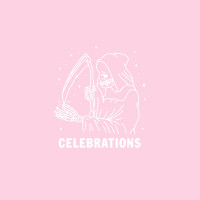 Nightmares for a Week

God, I've been waiting on this record forever. Nightmares for a Week are one of those bands I really wished blew up big time because since 2010's Don't Die and 2013's Civilian War, it just seemed like they had a magic bands tried hard to capture on the indie/rock scene, but simply couldn't. And it's not for a lack of trying, it's just that NFAW for a week did it so well. Celebrations, five years in the making, is a perfect example of patience being a virtue and more importantly, paying off, because it honestly feels like their most mature, collected and accessible tunes to date -- and something which services fans of old while inviting new blood to the dance.

I've often found it hard to rank their discography, but I do lean towards the split they did with Banquets most of all four years ago. If pressed, that's my choice and I absolutely love how Celebrations riffs right off this album. It picks up where that 12-inch left off with songs like "Canadian Tuxedo" and tributes to bands like the Ramones and the Clash (see "Peep") showing how delicately balanced NFAW harness their sound. They cultivate folk-punk bangers (dad-rock even) for fans of bands like the Gaslight Anthem, Restorations, Blacklist Royals and Typesetter, but know how to kick it up a notch when ready.

And rest assured, this album is so dynamic, with songs like "Friends" feeling like it's taken off the last Iron Chic record, and the bulk of Celebrations yelling at you via anthemic shoutalongs such as "Arrows" and "Summer". Trust me, melodic hooks, crunchy bass-lines and bouncy rhythms manifest at every turn, to the point where you can't believe how far they've come from being something you'd compare to the Get Up Kids, Saves The Day and yes, even Braid (and rest assured, vocalists Bill Manley and Sean Pillsworth bring their A-game as usual as if to salute these influencers over the course of their career).

They have fun too waxing on about life, romance and growing old, celebrating the journey so far and the emotional coaster brought with it. Case in point, the doo-wop dancey feel of "Beautiful Boy" which is what NFAW are best at: making whatever style of music they want... infecting you, ear-worming you, and daring you not to head-bob or foot-tap. It's punk but not too punk, and it fits just right. Just one gem of many on an album of the year contender, for sure.