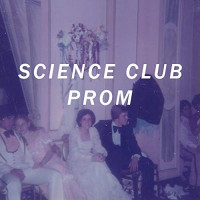 Philly trio Science Club has been on a pretty strong run since 2015, and continues to build on that with their new full-length Prom. If Science Club’s earlier work has been sometimes criticized as a “hodgepodge” of other bands’ sounds, which is something I can somewhat agree with, they have steadily been defining themselves with their own sound. When all is said and done, Prom may be the equivalent of their debutante ball.

That doesn’t mean there aren’t hiccups, and the first (and really only) one lands on your lap right away. The lead track “War Memorial” is a bit of an Icarus moment for Science Club. Don’t get me wrong, the song rocks pretty hard, but there is a stylistic choice made where guitarist/vocalist Nate sings along with himself in dual, overdubbed vocals in two different styles, and it just doesn’t land as steadily as I think they were hoping. To borrow a baseball metaphor that I may not be using correctly, this song was a bit of a walk. It’s not bad, but I suspect it sounds different (and more effective?) stripped down and live.

But, never fear! Getting back to those baseball metaphors, the remaining eight songs on the album are doubles or better (including a couple home runs). The immediate follow-up, “Prom,” is a mid-tempo tribute to the friendship (and one-sided romance?) between two social misfits in which you can feel the desperation of love emanating from one half that strikes a chord deep into the heart.

And if “Prom” was gentle and earnest, “Breakfast, Lunch, Dinner, Breakfast Again” is a forthright, blisteringly fast and, ultimately, heartbreaking condemnation of how we treat those in our community who are outcast and shoved to the fringes of society. When our narrator eventually admits his own culpability in this (‘And I used to roll my windows up and always drive away’), his voice breaking into a near scream, it hits you in the gut.

“Alex or Alison,” track seven, has slowly worked its way into being one of my favorite Science Club songs. A slow build which smolders before ramping up into a powerful roller coaster crescendo of fury and then back down again, back and forth.

It isn’t until the sixth song, “Yolanda,” where bassist Nick’s uniquely nerdy singing voice is heard in the back up vocals. He is also found on the amazingly energetic “Emotional Bullshit VI – The Undiscovered Country (Lights)”- a ready-made sing-along song where the backing chorus of “There is light inside of me” is repeated despite what the overlying main vocals are self-deprecatingly saying.

If there is one thing I miss about the newer Science Club is that Nick seems to be under-utilized as of late. I can see how the direction the band has taken may not lend a lot of songs to his vocal stylings, but I wish there was a way they could bring him out more often, as “Emotional Bullshit VI...” is a great song that brings out the best in all members of the team.

In my view, Science Club is on the up and up. The song-writing and skill has improved immensely and while I admittedly can’t suss out what the meaning of every song is, regardless I still feel that I am being told a story. Few bands can get me singing along to a song after only one or two listens, but the cadence and delivery of the songs on Prom do just that (yes, even the first track). There is something about these songs that speak to me, and they are astonishingly effective at worming their way into your ear for days, if not more.

Nightmares for a Week: Celebrations