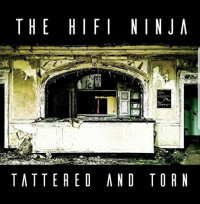 There’s always been a special place in my heart for 70s-style down ‘n dirty hard rock. The energy, the loose play, and the tough-as-nails vocals, all of it gets me wired up. As such, the music that The Hi Fi Ninja puts out, which is equal parts garage punk and that aforementioned hard rock style just tickles me pink.

On their newest EP, Tattered and Torn, The Hi Fi Ninja don’t really break the mold that they’ve built up as much as bring it a bit more forward. The band ventures out a bit compositionally and production-wise to improve their craft but, underneath is that same dedication to fist pumping music that made me like them in the first place.

I won’t go into every song, but I would like to make note of a few. The lead track, “Pride Like Medicine,” starts out every bit like the kind of song you’d see rocking out of a conversion van with a wizard painted on the side- lead guitarist/vocalist Ronnie McCoy’s scratchy voice tearing it up but, suddenly when the chorus strikes up he transitions into bona fide singing (the kind my mom would like). It’s as striking a change as it is effective.

“Black and Blue,” the fourth track on the album, has a rumbling cadence to it, and ably demonstrates McCoy’s uncanny ability to deliver lyrics that just shouldn’t fit together. Finale “Tin Man” is full on rock with a nice ‘chunka chunka’ rhythm laid down by the base, and features a bit of a gentle breakdown in the middle before rolling back into into the rock. A curiosity by The Hi Fi Ninja standards, this track breaks the four-minute mark, every second worth the price of admission.

As I said before, Tattered and Torn doesn’t bring a lot new to the table, but it is a worthy addition to the band’s discography and is a blast to listen to repeatedly. If you are a fan, pick it up. If you haven’t heard of the band, this is as good a place to start as any. Get to it!