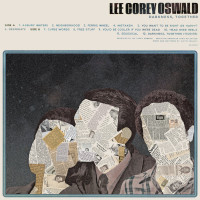 There’s not many people coming from the millennial generation that feel any type of positivity about what the future holds. We’re broke as fuck, lack job security despite being the most educated generation ever, and we were shoved into this situation through the wholesale of an American Dream™ designed by McWork and its affiliates. Spectacularly, as we came into young adulthood, that very system that sold that very dream led by those very bullshit salesmen shit the bed. But we get it. We’re in on the joke at this point and faking our way through adulthood as best we can. Lee Corey Oswald’s Darkness, Together is the best representation of that conundrum in the year of 2018.

“Get your hands up if you love free stuff,” goes the opening line of back end cut “Free Stuff.” It’s a sarcastic take on how we are all doing what we need to get by. It’s also an incredibly anthemic chorus and one of the many toplines on Darkness, Together. Stand out tracks include “Curse Words,” “You Want to Be Right or Happy?” and single “Ferris Wheel.” The latter tackles suburban alienation through a bass and drum driven power-pop song. It catches the impending Sunday scaries with lyrics like “sorry I bummed so many / I was feeling weird / I’ll buy you a pack tonight.”

Imposter syndrome abounds throughout the album, particularly centered on the suburban alienation one feels in reaching an age where you should know better. “Neighborhood” calls for cutting out the comics chronicling what young adults find upon the decision to cohabitate, “living together is quite a test / you built a home / and I got stoned.” “Curse Words” captures the other end of millennial sprawl with the protagonist admitting, “I moved back in with mom / helping her mow the lawn.” They share a knowing delivery of lines like these with Rozwell Kid. The earnest lyrics and aforementioned sing-along choruses on Darkness, Together are album highlights. Despite the forays into power-pop and indie rock, this collection of songs will have no problem connecting in the high energy of a sloppy punk rock show. The band is similar to labelmates The Homeless Gospel Choir in that sense.

Darkness, Together sounds crisp, with just enough scrappy production to give it charm. It contains the same type of production value found on classics like On The Impossible Past. It allows Lee Corey Oswald to capture the fuzzy bass, keyboards, and drums driving the songs while not losing anything to the mix. Acoustics, harmonicas, and other instrumentation are peppered in throughout Darkness, Together. It also allows its imperfections to shine through as conscious decisions giving the album personality. “You Want to Be Right or Happy?” closes with singing over a solitary chord that gets fittingly bent out of shape on its final strums. It’s these types of details that reveal the intentionality in the production decision making process.

The album closes with “Darkness, Together (11/20/85).” It’s an ode to a lost friend that serves to underscore what Lee Corey Oswald have found to be truly important. With just an acoustic guitar and harmonica, the song pulls from memories of friendships, funerals, and wishing to just have one more conversation about “all the bands we would talk about / if only you were still around.” It’s likely the future isn’t getting better any time soon, but hopefully we’ll still have records like Darkness, Together to talk about with our friends.