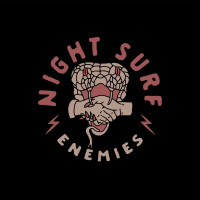 “Night Surf” is a short story by Stephen King collected in the anthology Night Shift about a group of survivors returning to a desolate beach after a superflu has wiped out a large swath of humanity. The survivors have developed a grim outlook on their fate and wistfully recall their youth at the beach before the plague decimated the planet. Brooklyn’s Night Surf trade in cynical but earnest pop punk unafraid to take a hard look at relationships and our current national climate. Rising from the ashes of Habits, the band’s first EP Blasted! was a primo slice of aggressive pop punk. The band’s new EP Enemies was released on Wiretap Records and recorded at Cannon Found Soundation in New Jersey with Jesse Cannon (Menzingers, Man Overboard).

“Reanimate” wastes no time in charging through the speakers and questioning our collective apathy. The band asks if we are willing to accept our current situation or flash “a little teeth in their general direction,” since “everyone’s faking it.” The chorus is a plea for re-engagement and a directive to rail against indifference by speaking from “the top of [our] lungs / clearly articulated” and to reanimate our efforts to transcend these toxic times. “Sleight of Hand” is barreling hardcore that barely breaks 60 seconds. It never falters in momentum even as the bridge ushers some spirited drum rolls, and the band defiantly determine “we didn’t come here to die!” “Watersnake” succeeds on its brevity with driving pop punk palm mutes buttressing melodic leads as the band wrestle with the necessity of occasional missteps and “failed dramatics” for continued growth, especially in the “waste of dreams” that constitute life in New York City. However, the strongest track on this EP is eponymous track “Enemies.” Boasting an endlessly repeatable chorus, the song takes a blunt approach to an adversarial relationship and crafts a “letter with slingshots and daggers,” refusing to “lift off the sanctions [until he’s] a cadaver.” “Enemies” is excellently constructed pop punk and evidence that this genre still holds plenty of vitality in the right hands.

Hopefully, Enemies is a harbinger that Night Surf have a full length in the works that’s as vigorous as their first two EPs. Their initial offerings suggest they are capable of being titans of punk rock.