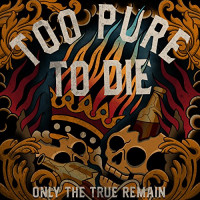 Too Pure To Die

Des Moines based straight edge outfit Too Pure To Die started back in the mid 2000’s. The band played a mosh heavy hardcore that meshed nicely into the budding metalcore and metallic hardcore scene of that era. As the band’s career progressed, the band experienced numerous member changes and a subtle stylistic shift, with the band eventually taking a break somewhere around 2010. Fast forward to the present year, the original band mates felt that familiar itch to reconnect and start jamming music again. The result of that reunion is 2018’s Only The True Remain.

Only The True Remain is a straight to the point, 4-song return to form. The down tuned and mosh-laden hardcore brings the listener right back to the bands first release - 2005’s “We Are A Weapon”. Too Pure To Die has always been a very breakdown oriented band that stylistically falls a long side mid-2000 era Bury Your Dead, Hatebreed and Throwdown. Only The True Remain holds true with all of the aforementioned influences, particularly earlier Throwdown.

While Too Pure To Die was at times tough to take too seriously years ago, the band always produced consistent and enjoyable heavy hardcore. Only The True Remain continues in that form. The band wrote a throwback EP that manages to feel fresh and avoids redundancy. The grooves are big and infectious, and the breakdowns are heavy and memorable. That is really all you can ask for with this style of hardcore. The band might even pull in a few new fans. FFO: Bury Your Dead, Terror, Throwdown, and the majority of the Trustkill Records catalogue (if you know then you know).

Rise of the Northstar: The Legacy of Shi