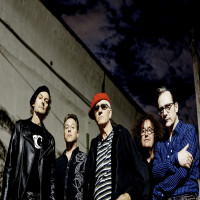 “Bring back the 1980s, that’s what I say,” Captain Sensible announced from the stage, choking on his own sarcasm, during the Damned’s Philadelphia stop at the TLA. As is the Philly style, some drunk jackass kept yelling out “Happy Talk!” as if requesting the cover over and over and over was somehow funny in any way. It wasn’t. Still, as soon as the Captain delivered his snap, Damned vocalist Dave Vanian retorted, without missing a beat, “Bring back the 1880s, that’s what I say.”

Forged in the hot fire of first wave punk, the Damned have served as architects and archetypes of the genre. They have perennially refused to pander to the audience and thank God they don’t. During the Philly stop, the band was obviously doing what they wanted to do and what that was, was goth it up. The band pulled a generous six tracks from their double LP masterpiece The Black Album and another three from Strawberries and Phantasmagoria albums, arguably their most mascara and mortuary type albums. It was a fair play by them, because those releases focus as much on composition and tone as they do riffage and chorus, and straight up, the Damned were sounding gooooooood. Vanian’s voice is as golden as ever and it really is astonishing just how his live vocals match (or exceed) the studio tracks after some 40 years of performance.

For his part, the Captain retained his boyish guile, cracking jokes here and there, while also shouting out “Shut up, you cunt!” at the aforementioned drunk cunt. But more importantly, the Captain is often heard praising prog-titans the Groundhogs and T Rex in equal measure (in fact, he was sporting an ace T-Rex T-shirt), and what the bands share in common is a dedication to technique which perhaps in contrast to most other punkers, the Captain has always focused on that himself. All of that is to say that the beret capped man knows how to play the frikkin guitar. Harder tracks like “Neat Neat Neat” and “Love Song” ripped along in hot takes while the creepy and more ambient stuff, such as the amazing version of “History of the World” resounded throughout the room with a sort of precion and energy that elevated the songs, all while keeping the tracks fresh and explosive sounding. There really are few musical thrills as great as hearing Vanian and Sensible working in conjunction on the same tune.

New album Evil Spirits made an appearance in three tracks, and early on in the night, “Standing on the Edge of Tomorrow” shot through the room. Call me crazy, but the track seems to have a sort of girl-group Motown energy and cadence and it’s a marvel that the band was able to wrap that around the punkish strike. Few bands can blend melody and an energetic pulse, but the Damned played it like it was no thing at all on stage.

Perhaps what’s most surprising about the band is despite that they do sound so honed- one doesn’t want to call them “polished” as that suggests a sort of uninspired approach- there seems to be a great deal of whimsy on the stage. At one point they randomly started singing “Don’t Bogart that Joint” because someone was smokin’ a doob, and really, as they stumbled into the song, it was reminiscent of a street-side crew singing around a barrel. Likewise, despite the fact that the band seemed dedicated to purposefully avoiding a bland “greatest hits” style set, smacking down Mr. Happy Talk throughout the night, near the end of their extended encore, they did snap into an improv take of the Captain’s “Wot.” That is to say, even when you try to pin the Damned down as guys that don’t like to be pinned down, they still jump out from under the tack at the last moment.

Before the Damned, Radkey blasted through a set of energetic classic-meets-modern punk. At the core of their sound was New York/Testors style three chord blues striking, that was as muscular sounding as it was sleazy. But whereas Sonny Vincent or Johnny Thunders would revel in the sleaze, Radkey put their own spin on the style but injecting some skate-punk energy and melody. The sound played both to the old heads and young uns in the crowd and that’s not easy at a show where the fanbase spans a good sixty years.

The show opened with the Darts who came out swinging. The fourpiece make no secret that they are influenced by the meanest styles of 60s psych-rock and boy does their live show show it. The riffs were fuzzed out and swampy. They keyboard was straight from the Adams family. The drums were straight bashing it up all the time. Vocalist Nicole Laurenne was pretty crazed though the set, leaping over her keyboard, shouting at the audience, hissing at the audience, and knocking things over in a whirlwind. Garage rock is best seen live and the gals underscored that point times four. Their newest tunes were some of their simplest and punchiest, which just goes to show how potent their strike is. Despite being influenced by the whole Nuggets crew, the band seemed very much in the moment instead of being retro, and that was probably due to their enthusiasm and chaotic playing style. Fitting that a band used music created from before punk to make such a punkish statement. That’s what the Damned have been doing since October 22, 1976 when Vanian gave a shout out to the Shangi-Las by asking “Is she really going out with him?”