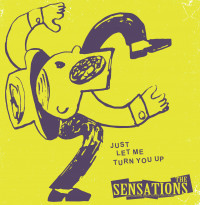 Formed in 2008, Tokyo’s The Sensations are somewhat tough to pigeonhole because they draw influences from various genres. Just Let Me Turn You Up is a great example of their eclectic sound. At times, it sounds like straight up rock ‘n’ roll as evidenced in the opening riff of the first track “Dig Your Own Grave” and other songs like “Watch Out”. Other times, the band cranks out some straight up punk rock in songs like “Feel Like Yesterday” (which has a Misfits-influenced opening). And many times, the band dances around a jangly ska-sound, that on the surface can sound a bit loose. But upon more listens, it all makes sense, and you realize that these songs are carefully and passionately constructed. Songs like “Keep Your Rough” and “Love Me” are great examples of this.


This album is difficult to sum up, but in general, it’s like one big party with a wide array of influences, thanks in part to the energy that each band member exudes; even if it sounds a bit goofy at times (which is not meant as an insult... See “Monkey Dance”). “Watch Out” has that party vibe, accompanied with some barbershop vocal progressions. Other tracks maintain a similar atmosphere with vocal harmonies, gang vocals, rapid snare shots, and jangly guitars while toeing the line between ‘60s pop, Jamaican dancehall, and crusty ska.

I have a lot of respect for bands that sing in a second language, especially one as complicated and dumb as English. While it can be tough to understand the lyrics at times, their raw energy clearly makes up for it. The band is attempting to gain a wider audience and with this album and some upcoming US shows, the band is sure to get some new fans.

No Idea: Break Through