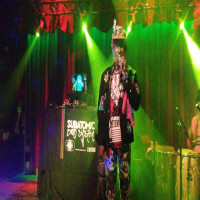 There is no other human being like Lee “Scratch” Perry on this planet… that is, assuming that Perry is human and that he’s from this planet. Despite clocking in at 82 years of age, The Mighty Upsetter, as he is known with good reason, played an extended genre warping, mind tripping, two hour and fifteen minute show in Ardmore, Pennsylvania October 25. By the time the show was forced to end, Perry, who was active engaged, and doing high kicks throughout the night, seemed to want to do another hour or two. The guy was electric!

At least stateside, Perry has been backed by the Subatomic Sound System for a few years now. Subatomic’s leader is DJ Emch and he’s done a great job of being the Adrian Sherwood of the 2010s- presenting legendary Jamaican artists to a new audience with music that is based on, but significantly morphed, from the classic work. Case in point, last year the group along with Perry released a re-cut of the classic Super Ape, now morphed into an electronic dub album with new contributions and musings. Reggae purists might cringe at the idea, but were Subatomic to simply “re-do” classic reggae, that in of itself might be somewhat boorish- a non-Jamaican taking strictly Jamaican music and using it to his own ends? Rather, the Emch approach, which stands on the shoulder of the Jamaican template all while paying tribute to the innovators and bringing some of them along, too, is the way to do it.

So, as a sequel to the Super Ape rebirth, Perry and Subatomic have embarked on a 45th anniversary tour of the legendary Blackboard Jungle Dub album. At the show, Emch announced that Blackboard Jngle was the first album- that might be like arguing what was the first rock album, but it’s as good an argument as any. Ostensibly Blackboard Jungle is an instrumental album, so the expectation was that Perry would come out, kind of contribute a shout of refrain here or there, and then leave after an hour, and we’d all be content to hear a new version of the classic release and get to salute Mr. Perry with some much deserved praise.

That’s not what happened.

Rather, the show began somewhat with a slow burn. Emch begin with some sparse, On-U style loops, gradually picking up speed and intensity. And to be fair, the audience, which seemed to be composed mostly of jam band fans and main line types, seemed challenged by the Spartan rhythm. Soon, legendary percussionist Larry McDonald (who is 81 himself!) took to the congas and built in top of the Emch’s electronic beat. After a short while, a young fellow on the sax came out and the crew finally started to fire up the crowd with a drastic re-working of “Dreamland.”

And then, as a sort of offering, a young lady brought some fruit on to the stage and stuck insense into it. She then ignited the sticks, creating a small fruit-pyre to summon The Upsetter himself. The bass dropped so low that it shook ones body and Mr. Perry took the stage, covered in buttons and buckles and ribbons and feathers. Even his face was covered in glitter paint. Already. One could tell that this would not be a same-ol-same-ol concert. Instead of opening with “Black Panta,” the group snapped into a bouncing, electronic version of “Inspector Gadget.” Perry can be somewhat mercurial, but he seemed to be in very high spirits. Not only was he on target with his vocals, but he was constantly adding extra bits here and there, as ever, in love with wordplay and rhyme.

Instead of doing just a straight run through of Blackboard Jungle, the crew decided to mix those tracks in with some of Perry’s bigger hits and a few rarities. “Kaya,” which while a Bob Marley recording but was written by Perry, was Scratch-i-fied into a chant to elemental powers as “Got to have FIRE now!” “Zion’s Blood” made an appearance as a super-duper-mega-heavy crushing version that literally shook the place and was both aggressive and spiritual.

As for the dub tracks themselves, Subatomic radically reworked the tracts into higher energy stompers, with sounds-a-plenty snapping from the speakers. It as sensory overload, in a great way, that is, and Perry seemed charged by the crowd, which was now riding the weird, trippy wave. In a bit of clever revision, the mostly instrumental tracks of Blackboard Jungle were re-written with new lyrics by Scratch. Sometimes, it was unclear if he had sat down earlier and composed new lines or was cutting new ideas on the spot. It was probably a mix of the two and frankly, what a way to do it. You really wouldn’t want Perry to dot he standard reggae thing to begin with, so, as the live sax and congas bounced around the room, and as the electronic backing howled out, Perry existed as a whirlwind- sometimes sticking to the script, sometimes riding off of unexpected diversions, high kicking there, baptizing necklaces there, sometimes issuing truly meaningful statements and sometimes just saying any old random thing.

“Dread Lion” was an early highpoint with its lion growls and Perry sort of stating his reason for existence. Meanwhile, as the concert smashed forward, clocking at an insane two hours and fifteen minutes, Perry seemed to grow more and more energized. Near the end, Perry and crew morphed a massive take of “Punk Reggae Party” into “Exodus” before giving salute to Perry’s 80s hits with “Chase Dem Crazy Baldhead.” Throughout the night, Perry was charged, excited, and seemed to be having a blast. Sometimes one might go see, say, Glen Campbell or Little Richard to really just “See” an artist and appreciate all he has done in the past. This is not the case with Perry. Without exaggeration, in the live context, Perry and the Subatomic Soundsystem have pushed his work into the next level which is as electrifying, interesting, and chaotic, as that which came before it. Instead of winding down his career and taking stock of his past, with the radically reworked live version of Blackboard Jungle Perry is already on to the next phase of his creative exploration and there is no sign of him slowing down yet.

The show opened with I Yahn I Arkestra, which features Chuck Teece of McRad (and the Bad Brains!) on drums. A bit more on the classic reggae vibe, the group was composed of about seven members who merged roots reggae with a bit of modern dancehall chatting. They warmed up the crowd fairly quickly with their homage and reference to the classic ‘70s works, but made it a point to keep the energy high during performance. As a nice surprise, HR of the Bad Brains showed up and did “Love Comes First” with the group, which found HR in good spirits and good vocal condition. A whole of this in combination style would have a great deal of promise. Time will tell…