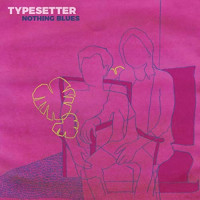 When I first heard Typesetter in 2014, Restorations was the first band that came to mind. Hearing them live at Riot Fest this year wasn't what I expected, however, as I didn't know how they changed up their style over the years. Admittedly, I wasn't following up as much, which was bad of me because Wild's End really was a solid record. Come Nothing Blues, while the sound is different, there's still so much of the old Typsetter to hold onto, but as the band waxes on about mental health, life and love, you can't help but let go and embrace the new pastures with them.

The key word on this record is 'versatility.' Sure, "Monogamy I (Gliss Happening)" opens a la Restorations, but the album quickly spirals into something that's all over the place, but in a good way. There are so many aspects on tap, tributes to '90s alt. rock, then to punk/grunge bands like Citizen and Title Fight, and even something for Sparta fans ("Only") to latch onto. Acoustics? "White Noise" has a warm Elliott Smith feel to fit for good measure.

Which brings me to how indie/emo/punk this record is. In fact, it's got that Midwestern burn of Run Forever and Signals Midwest... meets the shimmery guitars of New Jersey's Prawn. Throw in some American Football-influenced horns and it's a sound Typesetter definitely make their own -- "Technicolor" and "Viva" are the best examples of this, and two of their best to date. And when it's time to lighten the mood, "Real Conversation with Imaginary Friends" comes off with a Tigers Jaw spin to leave you wondering if they're actually a Philly band.

Seriously, there's a lot to soak in but Marc Bannes' vocals, the bouncy upbeat riffs, and new addition Sarah Bogosh (keys, vocals) make Nothing Blues something to remember. At Riot Fest, while I was surprised, it was a pleasant one and it perfectly set up what this record has to offer: hope for tomorrow, no matter how unknown the road may seem.