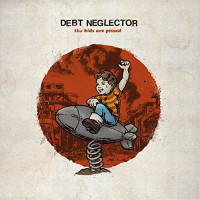 Debt Neglector’s 2017 debut album Atomicland was quite the surprise for the pop punk realm. The record is filled with the band’s own brand of aggressive, yet catchy pop punk tunes with a twist of angry lyrics that typically are critical of different aspects of the current political and cultural climates. Debt Neglector has followed Atomicland up with a six-track EP called The Kids Are Pissed.

The track “Go Fund Yourself” is a quick and catchy tune that starts off with an ominous bassline and guitar feedback that build up to where the rest of the band abruptly jump into the first verse where you’ll hear massive guitars and lead vocalist Alex Goldfarb’s signature raspy singing. This tune in particular is pretty choppy until the band hits the chorus, which has an interesting play on words that switch of between “Go fund yourself/Go fuck yourself” repeatedly.

Interestingly, Debt Neglector went in a more anthemic route with a couple songs on this EP, namely the title track and “New White Roses.” “The Kids Are Pissed” is palm-muted heavy tune until the chorus where Alex’s vocals get a bit higher and he backed up with gang vocals that sing some drawn out “whoa’s.” Later on in the track, one guitar goes back to the stand palm-muting while the other palm-mutes some higher notes over it, which acts as a light breakdown/bridge.

There’s no doubt that Debt Neglector is a quickly, up-and-comping pop punk band. Atomicland raised that point, but now The Kids Are Pissed solidified it. The band is clearly on a hot streak that I don’t think will go out anytime soon. If you were lucky enough to find Atomicland in 2017 then you will certainly find that this EP is a really great follow up.

Antarctigo Vespucci: Love in the Time of E-Mail