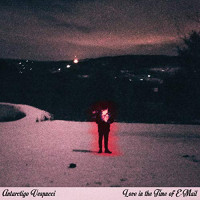 With the resemblance of a voicemail, Antarctigo Vespucci ease into their second LP Love in the Time of E-Mail. In two concise verses, punk celebrity and internet icon Chris Farren lays out the quandaries of love in digital. With the click of a screen, you can bring up some reminder, intentionally or not, of the person swimming in the deep end of your thoughts. One can be friends with someone without actually being friends with someone. As Farren questions, “is it weird that I’ve been thinking of you / I know the normal thing to do would be to talk to you.” On the other end of this, from start to finish, from initial ‘Add Friend’ to emails revealing precisely where it ended, relationships remain frozen in time online. The permanence of an email seems to carry more weight than a voicemail anymore. Farren laments, “I just wanted to leave a message / no need to call back.”

Love in the Time of E-Mail spends the following 35-minutes expounding on these notions. On the follow up track “Kimmy,” Farren sings, “when I see you later / I’m gonna have to figure it out” putting faith in the hope he and his love interest have the same connection they seemingly do online. On “Breathless on DVD,” the band explores the new type of digital boundaries we build, “I wanted to see you / to see if I still wanted to see you,” with instant accessibility. The intersection of human connection and digital distance hovers over “Another Good Thing” and “White Noise.” Do real human emotion and physical connection even matter if you can’t tweet about it? Or is it just white noise lost to the ether?

Throughout Love in the Time of E-Mail, Antarctigo Vespucci employ the imagery from the digital age cleverly. When they are singing about having their head in the clouds, you can’t be sure whether the cloud refers to digital albums filled with photos of times past or the daydreams of sleep deprived romance. The building plod of the mid-album “So Vivid!” captures the anxiety of those three dots indicating a text in progress. Building into an explosion of layered electronics, fuzzed out bliss, and vocal harmonies, Farren turns that anxiety to defeat admitting “those bright dots that swim around my blue sky / must have found a better place to hide.”

Listening to this album, there is no doubt about the competing and complementary forces comprising Antarctigo Vespucci. Rosenstock and Farren are two of modern punk’s most respected artists. Like most Antarctigo Vespucci songs, Farren handles the majority of lead vocals with Rosenstock providing harmonies and the occasional closing couplet. It would be easy to go through and list times the band comes close in sound to any of the players' former and current projects. The closing of the aforementioned “So Vivid!” hits similar heights found on Just Like A Vacation. The pop hooks of Can’t Die are layered throughout the canopy of distorted guitars and ambient fuzz on Love in the Time of E-Mail. “All These Nights” sounds like a mix of Pinkerton-era Weezer and the band’s current output, if they were a hip noise-pop garage band in Brooklyn.

Love in the Time of E-Mail is a thoughtful exploration of the human condition. It’s clear a lot intentionality went into the concept, tracking, and content of the album. It listens like a story, one of digitally driven anxiety and what personal connection means in our instant and interconnected times. Why clutter up your brain when there are so many things you can store in the cloud? It’s a bad, intentionally out-of-touch joke, but Antarctigo Vespucci give an honest answer in Love in the Time of E-Mail.

Direct Hit!: Crown of Nothing