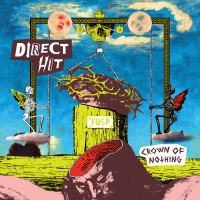 Fuck you! Get pumped!

When Ricky Frankel did his review of Direct Hit!’s Wasted Mind, I had never heard of them. But he gave it a high score and had a lot of positive things to say about the album, so I gave it a shot. Someone in the comments section described the album as one that they listened to with their jaw dropped for the entire album, and that’s the way I listened to it, too. I ended up giving Wasted Mind the number one spot on my Top 20 of 2016 list, but beyond that, it was basically the best album I had heard in over a decade. Every track was a powerhouse that absolutely knocked me on my ass. I love pop-punk and I love experimental music, and rarely do you hear the two come together to create high concept, high art pop-punk. In fact, I can’t think of any pop-punk band that has Direct Hit!’s deep artistic spirit and eye towards innovation. As I went backwards through their catalogue to discover Brainless God, Domesplitter, and More of the Same, I came to the conclusion that Direct Hit! were a band that set out to prove that you could make high art out of pop-punk, and prove it they have. Admittedly, I found their split with PEARS last year to be good, but not as mind-blowingly good as what I’ve come to expect from this band. Still, I looked forward to their new full length, Crown of Nothing, hoping it would pick up where Wasted Mind left off. It didn’t, but it’s still a hell of an album.

Direct Hit! was extremely ambitious with their first two LPs (for the purposes of this review, I’m not counting albums that are compilations of material that was released separately, namely Domesplitter and More of the Same, as LPs). Both were concept albums, the first telling a story about the apocalypse and the second a themed concept album about (mostly) recreational drugs. Concept albums aren’t easy to pull off, but Direct Hit! hit both of them out of the park. For their third LP, they again go the concept album route, but this time their ambition has grown and they set their sights on something really big and really difficult: a themed concept album about existentialism (heaven, hell, life, death, reality, existence, etc). It’s an incredibly tall order for a pop-punk band, but Direct Hit! has never been like other pop-punk bands.

In Ricky’s review of Wasted Mind, he pointed out how each of Direct Hit!’s three LPs, (he was counting Domesplitter) each sounded distinctly different from one another. Crown of Nothing is no exception to this rule. While Crown of Nothing sits on the intersection of pop-punk and hardcore like previous albums, the pop hooks are more subdued than they were on Wasted Mind, where everything sounded like Blink-182 on steroids. But what’s more, Crown of Nothing plays with elements outside of punk, continuing a trend that began on Wasted Mind, but taking it in a different direction. The opening track, “Different Universe,” is less a punk song than a pop-alternative rock song, despite some scattered instances of hardcore screaming, including the band’s trademark opening of “Fuck you! Get pumped!” Songs like “Life in Hell” play with blues riffs for the first time in Direct Hit!’s career and the result works spectacularly. “The Problem” is a very slowed down number with a reggae influenced vibe. And “Disassemble” kicks off the track with saxophones playing some free jazz. Then there are songs like “Welcome to Heaven” which are standard Direct Hit! pop-punk fare, clocking in at a lush four minutes long, while it’s followed by the 57 second song “Pain/Boredom” which, along with “Perfect Black” and “Bliss Addiction” offers some unmitigated hardcore like Brainless God’s “We’re Fucked” or many of the tracks off their split with PEARS last year. All in all, it’s Direct Hit!’s most diverse album by far, yet somehow the softer and harder tracks congeal into a coherent whole that works as one album.

I love concept albums, in spite of my difficulty in deciphering them, because I think it does more to present the whole album as one piece of art rather than as a collection of 10-15 completely separate artworks. I like unity, and there’s definitely a unity running through this album as it explores recurring themes. In terms of the themes it explores, the album is much closer to Brainless God than Wasted Mind, with both Brainless God and Crown of Nothing exploring the afterlife and both its possibility and its implausibility, with Crown of Nothing also tackling existentialist themes and the nature of reality and life itself.

Crown of Nothing doesn’t make my jaw drop immediately the way Wasted Mind did. Instead, Crown of Nothing is an intense thinker of an album that leaves me pondering the meaning behind all the themes, the lyrics and the metaphors, and the new direction the band has taken while still keeping one foot firmly planted in the style of music they’re known for. Despite it eliciting a very different reaction from Wasted Mind, it’s no less of an impressive pop-punk album. Someone once told me that if art doesn’t make you think, you aren’t learning anything, and then what’s the point of art? Crown of Nothing doesn’t offer easy explanations or answers to its complex themes and powerful but cryptic lyrics, and that’s what makes it an album that will have a long shelf life for me as I spend years dissecting it and trying to come to the true meaning of the album. That’s the sign of a truly brilliant work of art.

Antarctigo Vespucci: Love in the Time of E-Mail