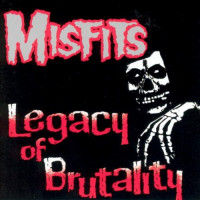 Young people will never know the struggle. When I first started getting into the Misfits in the late 80s, their music was pretty hard to come by. Walk Among Us was the easiest to find. It was the outlier in that it was on a well distributed (a subsidiary of a major even!) label. There were also copies of Misfits (retroactively referred to as Collection 1) floating around. The only other thing widely available was Legacy of Brutality. This wonderful compilation will always have a special place in my heart.

By 1996 and 1997, the Misfits had settled their legal issues and made almost all of their classic material available again. (I say almost all because there is still no 12 Hits From Hell!) That meant you could finally get your hands on Evilive, Earth AD, Collection 2, and even the entire Static Age LP. Until that point, Legacy of Brutality was our only window into the masterpiece that is Static Age. Nine of the 17 tracks that ended up on Static were on Legacy. “Static Age”, “TV Casualty”, “Hybrid Moments”, “Spinal Remains”, “Come Back”, “Some Kinda Hate”, “Theme for a Jackal”, “Angelfuck” and “She” are all classics of the Misfits’ early era.

The Misfits’ version of the Glenn Danzig solo single “Who Killed Marilyn” is also included. It follows Danzig’s near obsession with Marilyn Monroe and the Kennedys that started with the band’s name and continued with “Bullet”. The ultimate Misfits sing along, “Where Eagles Dare”, is here too. If you can hear this song without screaming “I ain’t no goddamn son of a bitch”, you’ve got more willpower than I do. Two more favorites round out the track listing. “Halloween” might be the definitive Misfits song, and was later recorded by Danzig’s next band, Samhain. “American Nightmare” is probably the song where Danzig most channels his inner Elvis.

Legacy of Brutality is a lasting testament to the Misfits’ pre Doyle Wolfgang von Frankenstein punk and roll beginnings. Walk Among Us would feature Jerry Only’s younger brother on guitar, and see the band going in a more aggressive direction. Earth AD would see the band pushing the metallic limits even further. The Doyle versus Bobby Steele versus Franché Coma debate will probably never be settled, and ultimately it’s a matter of opinion. There are a fair amount of us that (slightly) prefer the subtle punkabilly touch of Steele and Coma to Doyle’s proto thrash riffing.

Legacy of Brutality (the name is so great that I just love to say it!) was not without its controversies. Danzig mixed and produced the album himself without consulting his former bandmates. He also overdubbed most of the instruments, likely in an attempt to avoid paying royalties to former members. Between this, and Danzig’s refusal to share songwriting credit, it’s no wonder that things ended in a protracted legal fight. Legacy almost certainly added to the wounds that took over 30 years to heal.

Because it’s made up of several different recording sessions, Legacy lacks the cohesion and flow of Static Age and Walk Among Us. Its minimal liner notes provide no lyrics and keep us in the dark about which musicians played on what. It only includes the years the songs were recorded, and a single photo of Danzig. These things keep it from being as perfect as those other two records. Still, Legacy of Brutality is an essential piece of the discography of one of the most important punk bands of all time.