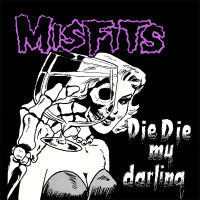 Love them, or hate them, the influence the Misfits had on punk rock cannot be denied. While elements of horror had been present in punk music prior to their arrival, they can safely be called one of the forefathers of horror punk. The Die, Die, My Darling single would later be added to the band’s second album, and last to feature original lead singer Glen Danzig, Earth A.D. The cover art used from this single was a salute to the Chamber of Chills horror comics, specifically issue nineteen.

This single features two Misfits classics, the first is the title track and the other is the closer to Side B, “Mommy Can I Go Out and Kill Tonight.” Musically, this is fairly standard fair for Danizg-era Misfits, save for one track, which shouldn’t be too surprising as he was their primary songwriter during his time in the band. The interesting thing, for me at least, with this release has always been the production was handled by SST Records house producer Spot. While his production work with a lot of SST artists tended to be just a bit muddy, it isn’t here. The production, while by no means, high end seems to have been tailored to the band’s sound on some level. This makes it some of Spot’s better production work, once again in my opinion.

While all the tracks on the album are easily recognized as Misfits’ songs, the title track was recorded during the Walk Among Us sessions. As such, it’s the only track to feature Arthur Googy on drums. Robo, best known for his work in Black Flag, sits in on the rest of the tracks. And while "Die, Die My Darling" is a timeless track, the other two songs on this single benefit from Robo sitting behind the kit.

For those who aren’t huge Misfits fans, it may be a bit surprising to hear that if the title track is the only song you’ve bothered to listen to … you’re missing out. Yes, Metallica covered this and a few other Misfits tracks on their Garage Days album. This shouldn’t be too surprising though, as previously mentioned the title track was recorded during the Walk Among Us sessions; by the time this was released, just over two years later Danzig’s talents as a songwriter had grown. This makes “We Bite” the most fully realized song on the release.

While certainly musically tighter than the live version on “Walk Among Us” the studio verion of “Mommy, Can I Go Out And Kill Tonight?” is still very much an older Danzig song in terms of song structure. This progression in song structure, has been stated to be part of the reason Danzig would part ways with the band shortly after the release of Earth A.D. and form Samhain.

While just a six-and-a-half minute blip in the career of the Misfits, this single was a major step in Danzig leaving the band and finding his own voice musically. First with Samhain and later in his longest running project featuring his own name. The influence of this release can be felt both inside and outside of the band. While I already touched on Danzig’s post-Misfits career, these songs were also the jumping off point for Jerry Only taking over the Misfits albeit a version of the band some of their original fans never embraced. Outside of the band’s own members, their influence can be heard everywhere from AFI, to Groovie Ghoulies, and Bouncing Souls. Their influences extend outside of the punk world as well, with bands such as the aforementioned Metallica, early Christian Death, and even shock rockers like Marilyn Manson.

The Misfits: The Devil's Rain