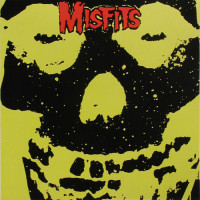 Three years after the initial disbanding of the Misfits, 1986’s Misfits, or as it is usually known Collection, compiled the highlights of the, at the time, short-lived New Jersey band’s career.

Misfits founding singer Glenn Danzig had just launched his new, eponymous band to surprising commercial and critical success. Obviously there’s space to speculate about motives for the release of Collection around the same time, but whatever they may be, it did turn to out to be an important move to make.

In that initial six year run of the Misfits, the band encountered more obstacles than most bands do during a decades-long career. There were numerous lineup changes, cancelled tours (or tours that never existed in the first place), release struggles, incarcerations, and, as some would call it, the inevitable burning out; mainly Danzig’s own. During this span, Misfits only managed to commercially release one full length album. Other singles and EP’s had been self-released, but by 1985 these were very hard to come by. The wide release of Collection on Virgin Records offshoot Caroline Records put these songs into the hands of many for the very first time.

Collection (commonly referred to as Collection 1, as Collection 2 followed shortly after) has long been regarded as the best place to start for those unfamiliar with the band. It’s easy to see why; this is the band at their raw best. While the production and recording quality is fairly uniform throughout, the Misfits were indeed a talented enough group of, well, misfits, that these early works set the groundwork for not only future material of their own, but for hundreds of bands that came after.

The Misfits are known best for infusing a goth/horror element into punk rock. And while that isn’t wrong, it’s a little more complicated than that. Sure, most of the lyrics involve zombies, vampires, ghosts, generally undead things. But I’m not convinced that musically we can classify them as simply punk rock.

“She”, “Teenagers From Mars”, and “Skulls”, are, accurate for their time, Class of ‘77, 1-2-3-4-1-2-3-4 yelping punk bouncers. And songs like “Horror Business”, “Night of the Living Dead”, and “London Dungeon” embody the best of the goth rock wave that would thrive throughout the 1980’s. While of course lyrically similar, the distinct styles reflect a band that would not, and still will not, be pigeonholed.

The changeups don’t stop there. We can hear a breezy British Invasion vibe on tracks like “Hollywood Babylon” and “Ghouls Night Out”. “Bullet” and “Mommy, Can I Go Out and Kill Tonight” rivaled the best thrash metal of the day, while “Earth A.D.”, “Devilock”, and “Green Hell” were as American hardcore as CBGB’s in the 80’s.

The spotlight here belongs of course to Danzig. His rich baritone voice has an impressive range, one that could be suited for a wide array of performance styles. In mainstream terms, he’s approximately a mix of Joey Ramone, Jim Morrison, and Roy Orbison. Not bad company to be in. He’s also very instinctive as a writer. He has a keen grasp on his own voice, and impressively crafts his wording to perfectly suit his vocal skills. Unlike many punk singers of the time, we never hear Danzig overextended, despite how loud he got. It often comes right down to the syllable; he wouldn’t end a line with an -ack sound when he knows he can make a similar word ending with an -ah soar much better. It sounds simple enough on paper, but this level of perfectionism just wasn’t all that common in the heyday of punk and hardcore.

While we’re on the subject of perfectionism, Misfits devotees will hear that these are not all original versions of these songs. Mr. Danzig, it seems, is something of a control freak. No no; I’m serious. So since at this point this release was in his hands alone, he made a few changes. Some of them don’t really affect the song itself, such as keeping the engineers intro, or keeping the hard stop instead of fading out. I get it; it sounds more authentic, like the listener is in the studio. But he also decided on a few tracks (“Night of the Living Dead”, “Vampira”, etc) to overdub the original guitar parts himself. Now the original guitars here were very well done. As I said, this was a talented band, not just singer. While Danzig’s guitars are maybe a bit grittier, I’m not sure the change was artistically warranted. It appears this was purely about ego. Shocking, I know.

If you, or more likely your children, still haven’t dived into the band that made the Crimson Ghost as recognizable a symbol as the Golden Arches, Collection is a great place to start. All told, this is a loud, rollicking, roller coaster summary of a landmark American rock band. Collection is the kind of summation that would be an ideal bookend for the Misfits, even without the future reunions and multiple incarnations.